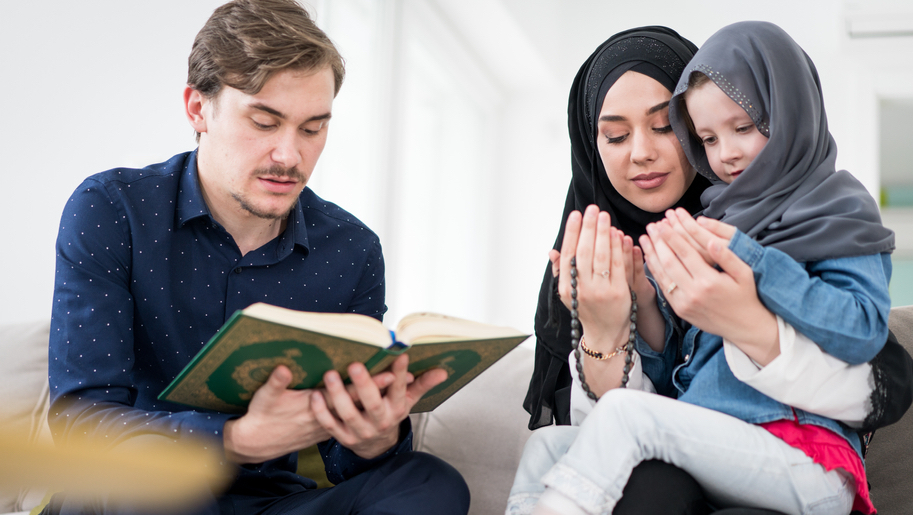 With all the othering and discrimination that American Muslims have faced over the past two decades, and especially over the last four years, one may think that nearly all Muslims fall into the category of “non-white.” This instinctual racialization is a natural outgrowth of media depictions and political narratives that emphasize Muslims’ distinctiveness. In such an environment, one can certainly be forgiven for imagining a dominant racial group and a marginalized religious community as mutually exclusive.

In truth, the percentage of American Muslims that self-identify as “white” is far from negligible while the proportion that would be officially designated as white (based on current Census criteria) is considerably larger. In the 2017 Pew survey of American Muslims, 40% of respondents are categorized as white, although half of those in this group are of Middle Eastern or North African (MENA) descent (an ancestry that the census presently codes as racially white). Unlike Pew, ISPU offers respondents “Arab” as a racial/ethnic category.  The percentage of respondents who chose “white” from this expanded menu of options averaged 22% across the five waves of ISPU’s American Muslim Poll from 2016-2020 (a tally that parallels the Pew data). White Americans thus comprise a sizable segment of the Muslim community.

For example, white Muslims were more likely to:

A future post will further examine these attitudes and behaviors, with the remainder of this piece dedicated to shedding light on what exactly it means to be a white American Muslim. The following are key empirical takeaways from the Pew 2017 data.

1. Most white Muslims were raised Muslim

White American Muslims are not as “new” to the faith community as many may think. To be sure, some of the most recognizable white Muslims in the US (e.g., Suhaib Webb, Hamza Yusuf, and G. WIllow Wilson) were not raised in the faith. Yet, while this segment of the community certainly includes a large percentage of converts, the vast majority were born into Muslim families. More specifically, about 66%, or two-thirds, of whites (not of MENA ancestry) have “always been Muslim.”

2. Most white Muslims are foreign-born 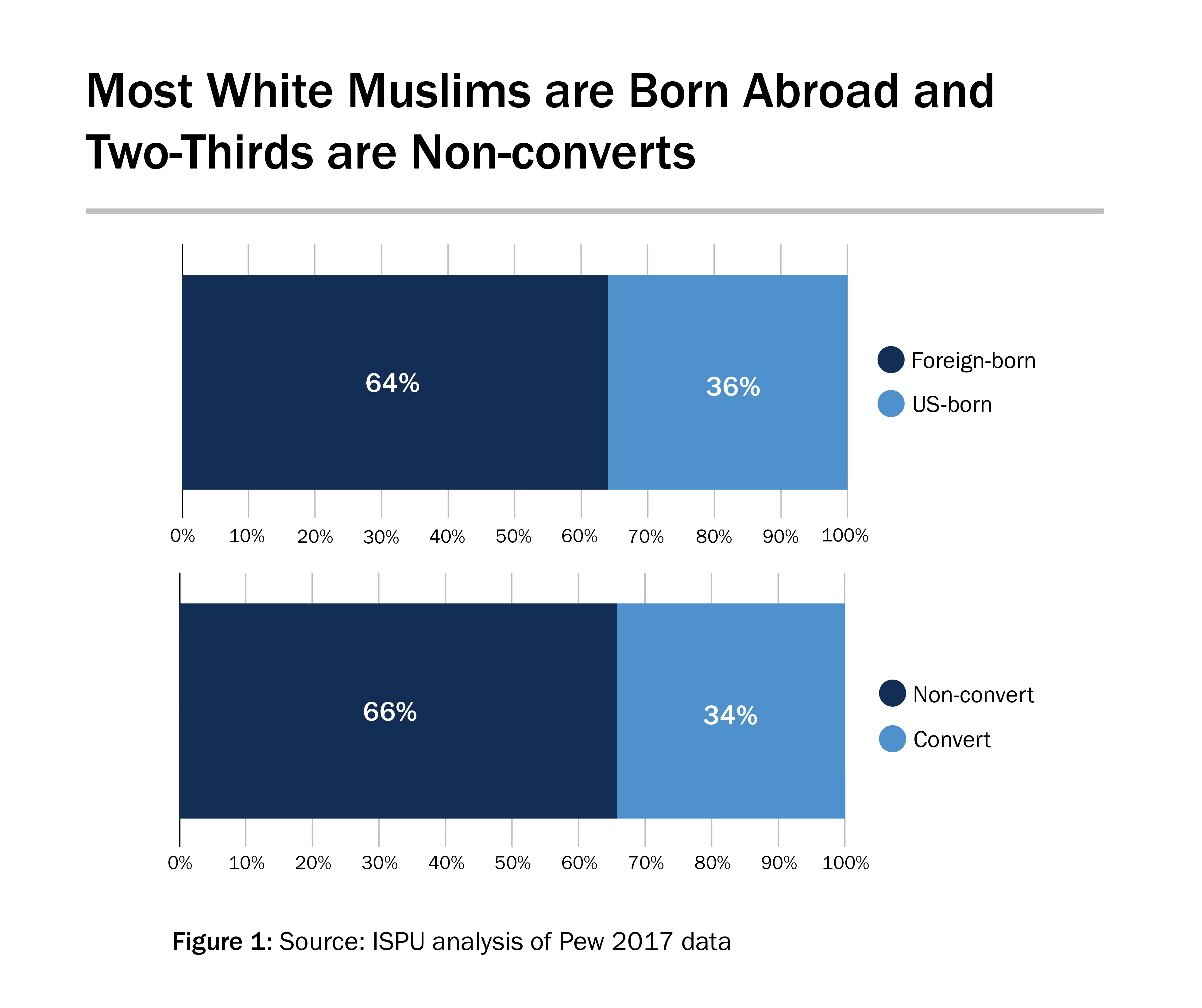 Another related, and perhaps counterintuitive finding, is that 64% of white Muslims immigrated to the United States (Figure 1). This data point is not altogether surprising, however, given that “white” as a category is a lot more capacious that perhaps we assume it to be (see next section).

3. Even among white converts, 20% are foreign-born 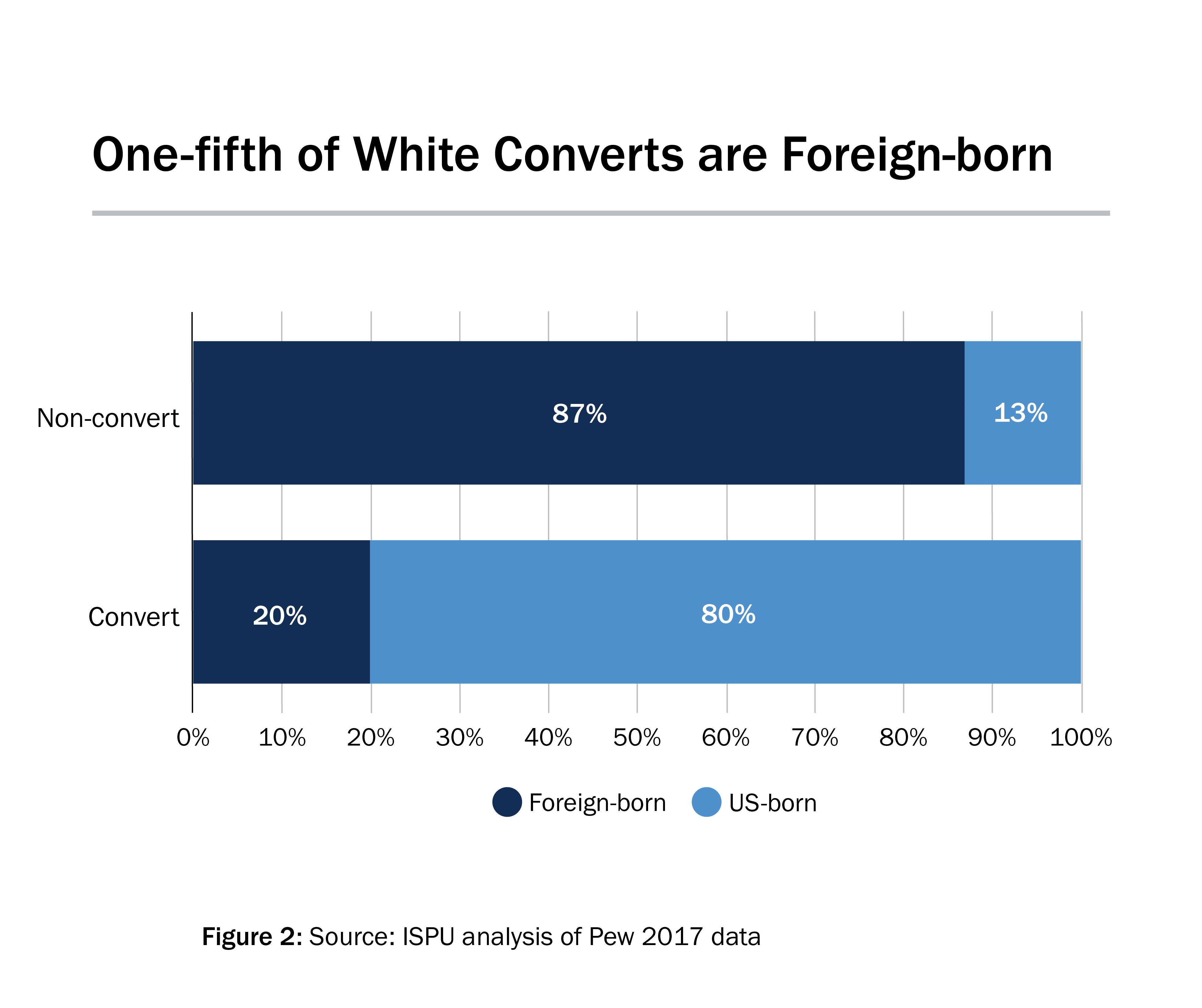 A lot has changed in the year since we fielded our 2020 American Muslim Poll in March 2020 during the presidential primaries and as schools and states began to shut down due to COVID-19.

Looking at nativity broken down by convert status, we find that one-fifth of white converts are foreign-born compared to 87% of white Muslims raised in the faith (Figure 2).

4. Most white Muslims are women. 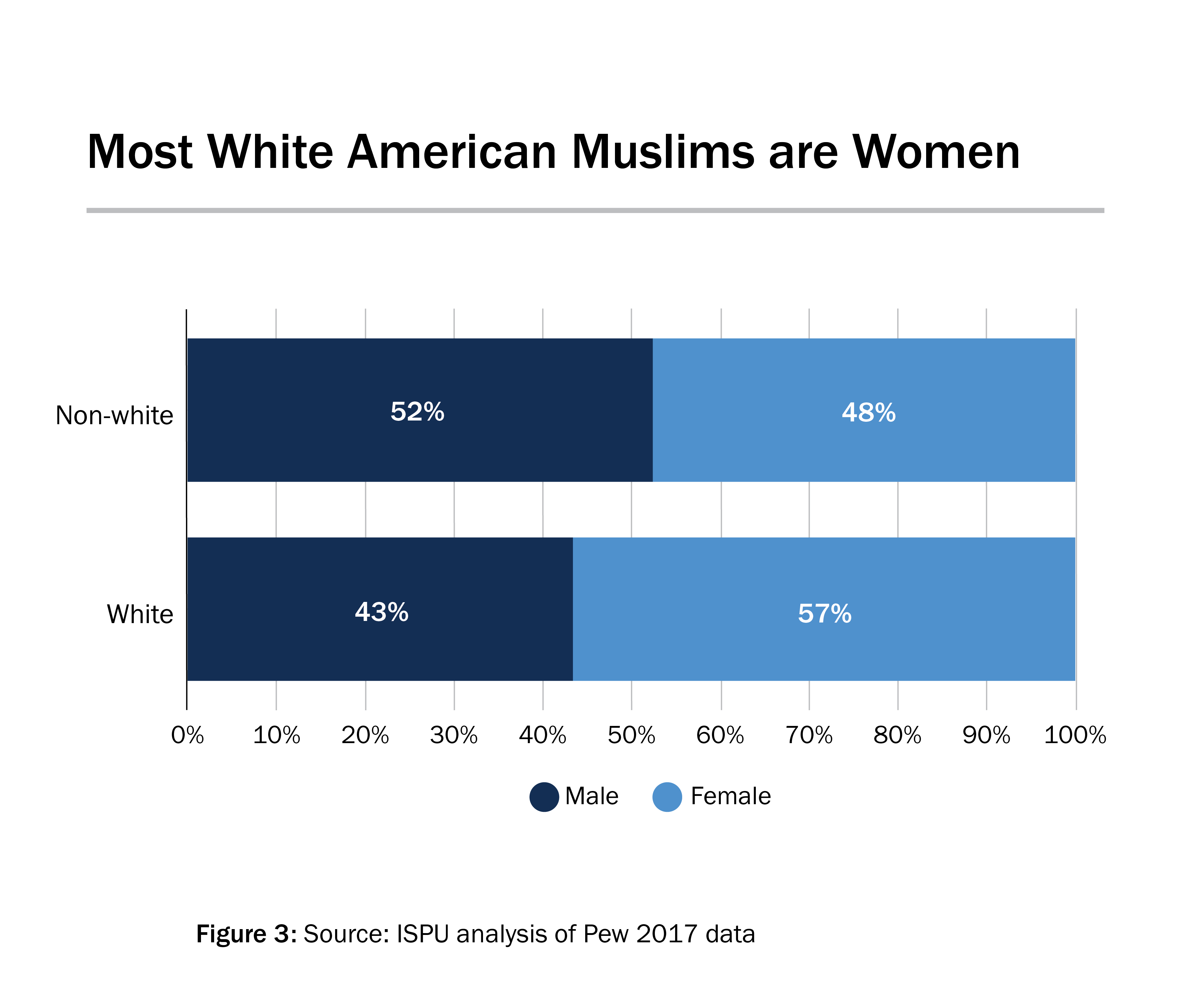 While a slight majority of non-white American Muslims are men, this characteristic is reversed among white Muslims, 57% of whom are women (Figure 3).

5. Most white converts are men 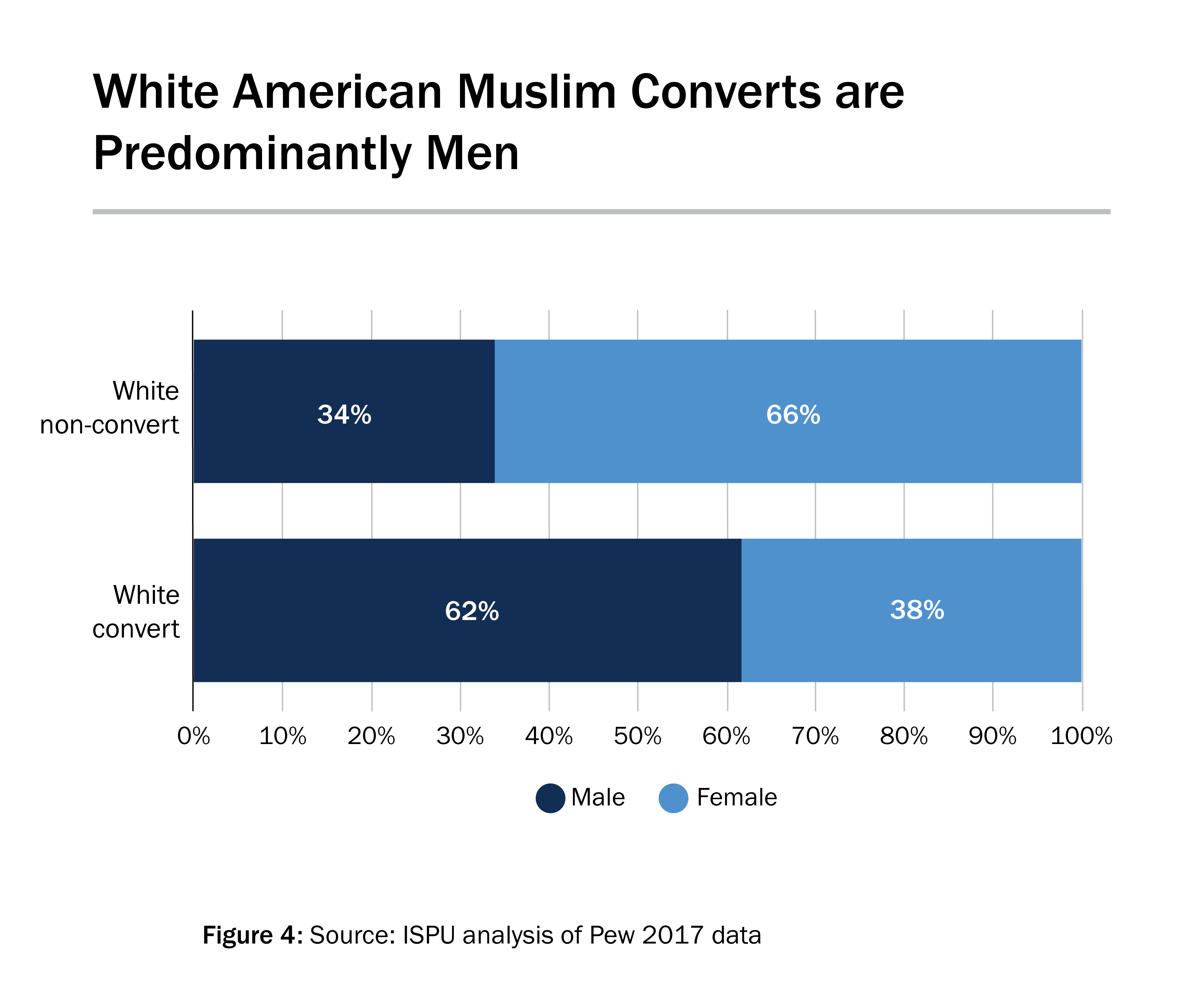 Breaking these data down by convert status reveals a stark divergence: nearly two-thirds (66%) of non-convert white Muslims are women while 62% of white converts are men (Figure 4).

A brief note on “whiteness”

It is worth taking a moment (and not simply taking for granted) what we mean by “whiteness.” While identity is more nuanced than the box you are forced to check on official forms, these formal classifications can nonetheless hold considerable sway over how one views their place in society. To that end, Muslims hailing from European ancestry will most likely consider themselves white in the American context. This does not simply include those individuals from Northern and Western Europe, but also the territories of Eastern Europe that were formerly under Ottoman rule (e.g., Bosnia, Kosovo, and Albania). Additionally, individuals from the Caucasus, Russia, and former Eastern Bloc (which collectively house a substantial Muslim population) typically tend to identify as white. Ethnic Turks and Persians are also counted as white under census rules, although these associations have a more fraught history. Of course, some individuals of Arab descent may also self-identify as white, although increasingly this demographic is recognizing a gulf between their official racial designation and their lived experience.

This piece presented a rare conceptual framing and empirical grounding of white American Muslims. Some may find the preceding consideration of who counts as “white” and/or the statistical findings associated with this group to be surprising. Such discoveries are all the more reason to value data and analyses on the most diverse religious group in America.

Youssef Chouhoud is an assistant professor of political science at Christopher Newport University, where he is affiliated with the Reiff Center for Human Rights and Conflict Resolution. Youssef completed his PhD at the Political Science and International Relations program at the University of Southern California as a Provost’s Fellow. His research interests include political attitudes and behavior, survey methodology, and comparative democratization. Learn more about Youssef→