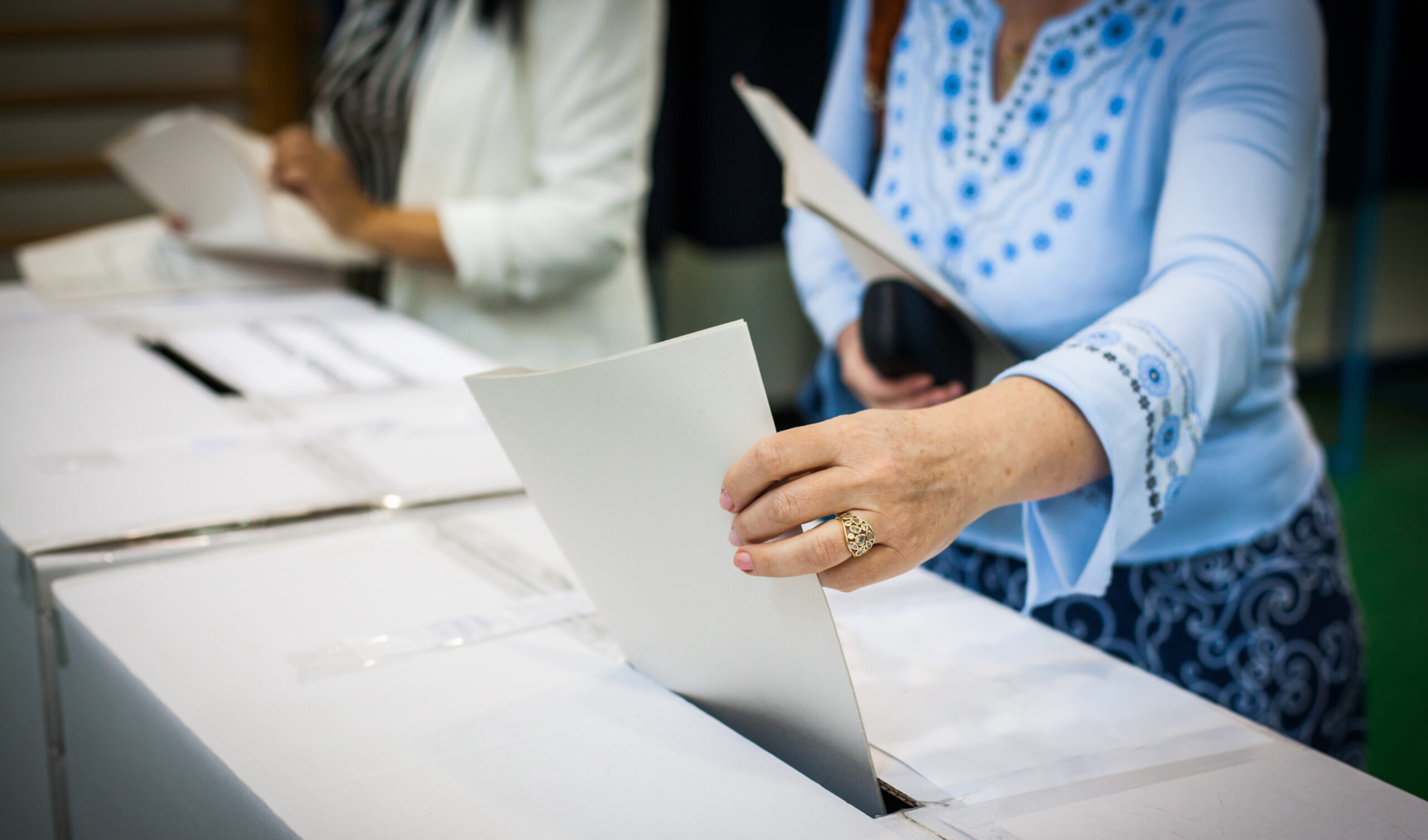 What determines one’s political attitudes? Naturally, a number of factors drive the variation we see across the general public, including the socialization one undergoes through their family, friends, and media consumption. Demographics also play a critical role in shaping political beliefs. Age, location, and nativity can each influence the set of considerations (and the weight placed on those considerations) that drive vote choice and policy preference. In recent years, one particular demographic characteristic has taken on a more central role in shaping Americans’ viewpoints: race/ethnicity. Does this increasingly conspicuous attitudinal divide between whites and non-whites in the general public hold among American Muslims?

On certain key metrics, there appears to be little difference between white Muslims (who make up 23% of American Muslims, according to ISPU’s 2020 survey) and their non-white coreligionists. Figure 1 shows that these two groups are nearly identical when it comes to core measures of religiosity. Among both white and non-white Muslims, approximately two-thirds feel that religion is very important in their lives while two out of every five respondents report attending religious services at least weekly. This parity is evident in some political preferences, as well. White Muslims are as likely as non-white Muslims to support building coalitions with Black Lives Matter or LGBTQ groups.

Yet, there are also some notable attitudinal divergences between white and non-white Muslims. Figure 2 shows white Muslims were twice as likely as all others to approve of then-president Trump’s job performance (23% vs. 51%) and more than three times as likely to want to see Trump re-elected to office (9% vs. 31%). Compared to their non-white counterparts, white Muslims were also significantly more likely to support building coalitions with groups championing the cause of religious liberty (48% vs. 61%) and anti-abortion legislation (47% vs. 63%). In general, it seems that white Muslims may not necessarily be less likely to support liberal groups and movements, but are much more comfortable backing conservative causes and politicians.

Indeed, as Figure 3 shows, white Muslims are statistically indistinguishable from white Americans in the general public in terms of support for Donald Trump. This finding underscores the point that, even when it comes to issues where we would expect religious identity to be the primary driver, race/ethnicity can exert an overwhelming influence on one’s attitudes. 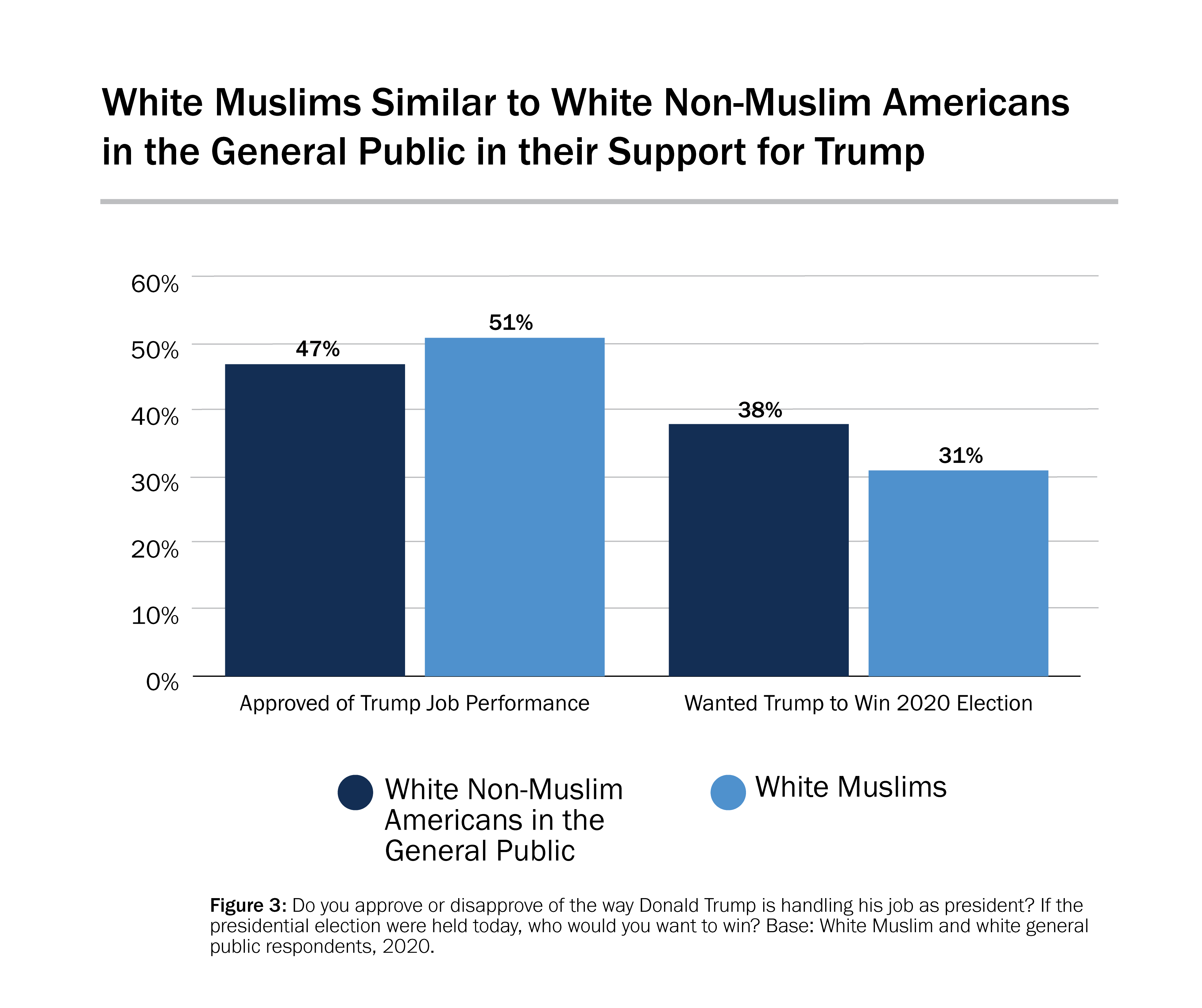 Muslims in the US do not exist in a vacuum, but are instead nested in the same social and political environment as other Americans. Muslims are therefore exposed to the same social and political forces that generally influence American attitudes and behaviors. Certainly, being a religious minority is a salient factor in American Muslims’ political preferences; but as the preceding analysis strongly suggests, it is by no means the only determinant.

¹ A previous analysis showed that white Muslims are demographically distinct from other Muslims in certain respects. Therefore, although the figures in this piece present simple mean differences for ease of presentation, each comparison was secondarily tested to ensure that the observed relationship is not simply a function of political party identification, age, income, sex, education, or nativity.

² ISPU’s American Muslim Poll 2020 survey included the following question: Some activists in your faith community have sought to build political coalitions with others who may share their political goals. Would you support politically working with political conservatives on religious liberty issues.

Youssef Chouhoud is an assistant professor of political science at Christopher Newport University, where he is affiliated with the Reiff Center for Human Rights and Conflict Resolution. Youssef completed his PhD at the Political Science and International Relations program at the University of Southern California as a Provost’s Fellow. His research interests include political attitudes and behavior, survey methodology, and comparative democratization. Learn more about Youssef→