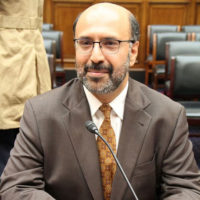 Dr. Hassan Abbas is Distinguished Professor of International Relations at the Near East South Asia Strategic Studies Centre (NESA), National Defense University in Washington DC. He serves as a senior advisor at Project on Shi’ism and Global Affairs at Harvard University’s Weatherhead Center for International Affairs, and his current research work focuses on building narratives for countering political and religious extremism & rule of law reforms in developing states. Previously, he served as a professor and chair of the Department of Regional and Analytical Studies at National Defense University’s College of International Security Affairs in Washington, DC. He is also a senior adviser at the Asia Society.

Previously, Dr. Abbas served as professor and department chair at National Defense University’s College of International Security Affairs (2011-2019) and as the Distinguished Quaid i Azam Professor at Columbia University (2009-2011). He has held fellowships at Harvard Law School’s Islamic Legal Studies Program & Program on Negotiation (2002-04), the Belfer Center for Science and International Affairs at the Harvard’s Kennedy School of Government (2005-09), Asia Society in New York as (Bernard Schwartz fellow – 2009-2011), and as a Carnegie fellow at the New America Foundation (2016-2018). He holds a PhD. from the Fletcher School of Law and Diplomacy, Tufts University, an LLM in International Law from the Nottingham University, UK and MA in Political Science from Punjab University, Pakistan.

Dr. Abbas regularly appears as an analyst on international media and writes pieces for various leading international newspapers and academic publications. His latest book, The Prophet’s Heir: The Life of Ali ibn Abi Talib (Yale University Press, March 2021), provides a portrait of Ali ibn Abi Talib, the man who “assumed the spiritual mantle of Islam to spearhead the movement that the prophet had led.” Dr. Abbas’s previous book, The Taliban Revival (Yale University Press, June 2014) chronicles the Taliban’s survival and resurgence after 2001, through firsthand research and interviews in the area.

U.S. Policy Toward South Asia: Ideas and Choices for the Next Administration (2021-2024)

The Day After al-Sistani