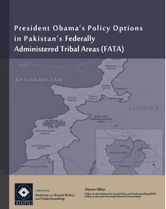 There is an emerging consensus among foreign policy experts that the growing insurgency and militancy in Pakistan’s Federally Administered Tribal Areas (FATA) poses the greatest security challenge not only to Pakistan and Afghanistan, but also to the United States. Some scholars even project that a major terrorist act with al-Qaeda footprints in the United States might result in an American strike and ground invasion of this area. President Barack Obama has repeatedly talked about stepping up military action in Afghanistan as a panacea to the expanding crisis in that country and hinted as early as August 2007 that if elected, he would sanction direct military strikes in FATA if there were “actionable intelligence about high-value terrorist targets” and if Pakistan failed to act. Situation has deteriorated in the region during the last year further complicating Obama’s policy options for stabilizing South Asia.

Turbulence and insurgency is not new to the Pak-Afghan tribal borderland. In the historical context, Afghanistan was a flashpoint of Anglo-Russian rivalry in the nineteenth century, and tribes living in the borderland played a crucial role in what is often termed the “great game.” The Soviet-American confrontation in the last quarter of the twentieth century further re-energized the traditional warrior-like ethos of the area’s tribes, as FATA became the base camp for religious warriors from around the world eager to confront the Soviet forces in Afghanistan. Abundant financial resources and armaments were made available by the West (primarily the United States and the United Kingdom) as well as Saudi Arabia for the cause, and Pakistani intelligence services delivered the goods. The doctrine of jihad was conveniently reframed to inspire the fighters. Eventually, the Soviet Union could not bear the burden and had to retreat, leaving Afghanistan open to all local and regional contenders for power. Consequently, a brutal civil war erupted in 1989 and the western handlers of the war sneaked out without any notice. Pakistan and Iran tried to manage and manipulate the crisis through their favorites; however, this strategy backfired and the Taliban, posing as a stabilizing force, emerged on the scene in 1994. Pakistan quickly adopted them, and Saudi support came in handy. Until September 11, 2001, Taliban brutality and oppression reigned supreme in Afghanistan, and FATA served as the conduit for the Pakistani support. Tragically, none of the players that brought Afghanistan to this plight felt any guilt. Even if they did, they never expressed it.

The post-Taliban years (2002-08) witnessed FATA’s re-emergence as a hub of militant activity. Surprisingly, Pakistan and the United States paid little attention to this area and its dynamics in 2002-03, due to their myopic belief in the illusion that the Taliban were gone with the wind. The international community promised the Afghans a new life, and for a while there was hope in the air. But under the radar screens, Arab and Central Asian warriors who had enjoyed Taliban hospitality in the 1990s quietly started shifting to FATA where they found equally welcoming new hosts. They knew each other well. In the eyes of Pakistan’s military government at that time, the Taliban were not enemies. In fact, its friendly gestures toward the retreating Taliban were akin to an insurance policy, for Pakistan could very well require their services in the future. Given that the two countries share a 1,500-mile border in a largely unmarked mountainous terrain, Pakistan could neither regulate nor even monitor cross-border movement effectively.

Finally with American prodding, Pakistan moved its military units inside FATA – a first for Pakistan’s army. The tribal leadership reacted ferociously, as such an action was deemed contrary to established norms. In 2003-04, the army offered some peace deals to the local tribes, especially in the two Waziristan agencies, to control the situation. Such efforts were to little avail, however, for this was around the time when the “nation-building project” in Afghanistan started showing signs of stress and the reverse flow of the Taliban and the likes started taking place more robustly – from FATA to the Pashtun-dominated south of Afghanistan. By then, Hamid Karzai was routinely dubbed as merely “the mayor of Kabul” who needed foreign guards to provide his personal security. The limited mandate of NATO’s International Security Assistance Force (ISAF) was partially responsible for this state of affairs. There were other factors as well, as according to Mark L. Schneider’s (senior vice president, International Crisis Group) April 2008 testimony before the US House Committee on Foreign Affairs Subcommittee on the Middle East and South Asia:

The current state of affairs was not inevitable. It resulted from policy choices early on in the international community; light military and political footprints with the co-opting of local and all too frequently corrupt militia leaders rather than international boots on the ground.

The situation on the Pakistani side was also deteriorating: FATA and some parts of the adjacent North West Frontier Province (NWFP) were gradually slipping out of its control to such an extent that in recent weeks, militants routinely hit NATO supply lines and storage depots in Peshawar, the capital of NWFP, thus forcing the United States and NATO to consider other more expensive logistic routes. On average in 2008, Pakistan experienced one suicide attack every five days: 66 attacks in all, which killed around 965 persons (651 civilians, 159 security forces personnel, and 155 policemen).  The numbers are much higher if all types of terrorist attacks are counted. For instance, in the NWFP alone, the 475 terrorist attacks carried out in 2008 killed around 575 people.  Although militant groups based in other parts of the country (mostly Punjab province) were also involved in some of these attacks, FATA provided the major bulk. Analyzing the 2007 database of 26 cases of suicide attacks in Pakistan (out of a total of 61) where Special Investigative Unit of Pakistan’s FIA recovered crucial evidence, they concluded:  “More than eighty percent of suicide bombers belong to Mehsud tribe (residing in South and North Waziristan) and were aged 15 to 20.”

Many suicide bombers who struck inside Afghanistan also traveled there from the NWFP and FATA. Presently, Pakistan’s security forces are battling various brands of Taliban in different parts of FATA as well as the NWFP in an expanding insurgency environment. Despite the success of the nationalist and anti-Taliban Awami National Party’s (ANP) electoral success in the NWFP’s February 2008 elections, the overall situation remains dire.

This report focuses on what all of this means for Pakistan and the United States and how these trends can be reversed. The above historical background was deemed necessary to set the stage for this, as a selective reading of history all too often distorts facts and limits policymakers’ vision. A basic assessment of the ground realities in FATA is presented and followed with an appraisal of the Bush administration’s policies and an effort to decipher the Obama administration’s thinking on the subject. Based on these evaluations, recommendations are made for both the Obama administration and the present government of Pakistan.