Pakistan Can Defy the Odds: How to Rescue a Failing State 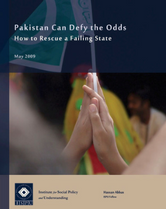 Pakistan Can Defy the Odds: How to Rescue a Failing State

Is Pakistan collapsing? How far are the Taliban from Islamabad? Can al-Qaeda grab the country’s nuclear weapons? These are the types of questions raised every day by the American media, academia and policy circles. And these are critical issues, given the nature of the evolving crisis in Pakistan. The approximately two dozen suicide bombings in 2009 so far, 66 in 2008, and 61 in 2007, all of which have targeted armed forces personnel, police, politicians, and ordinary people not only in the country’s turbulent northwest but also in its major urban centers, indicate the seriousness of the threat. A major ammunition factory area located close to some very sensitive nuclear installations in Wah (Punjab) was targeted by two suicide bombers in August 2008, an act that sent shudders across the country’s security establishment.

Although certainly a matter of very serious concern, what is often ignored in this context is that terrorists need far more than suicide bombers to get hold of nuclear materials. More alarming, in fact, is the expanding influence and reach of the Taliban and similar groups in the Federally Administered Tribal Areas (FATA) and the North West Frontier Province (NWFP). The Swat imbroglio speaks for itself. Poor law enforcement capacity and inadequate counterinsurgency know-how on the part of Pakistan’s army are partly responsible for this state of affairs. Confused threat perceptions and popular conspiratorial thinking also encourages the denial of reality. The failing infrastructure and absence of good governance, as exposed through prolonged electricity shutdowns and declining economic and social indicators, further provides an overall dismal scenario. All of this, however, presents only one side – and a scary one at that – of the coin.

Close your eyes to the other side of the coin at your own risk. Pakistan, a country of roughly 170 million people, recently witnessed the fruits of a courageous and sustained lawyers’ movement that led to the restoration of the deposed Chief Justice Iftikhar Mohammad Chaudhry and about 60 other superior court judges. These judges were victims of former President Pervez Musharraf’s short-sightedness and selfishness in 2007 that, in turn, provoked a major movement that inspired and galvanized thousands of Pakistanis to struggle for the rule of law, an independent judiciary, and the supremacy of the constitution. The people stood up for those who defied a dictator – a rare development in the 62 year checkered history of Pakistan. The movement’s leading activists were connected through Twitter.com, an indication that the middle class and pro-rule of law civil society elements are also well networked.*

A vibrant and enthusiastic electronic and print media helped this cause immensely – though sometimes at the cost of objectivity – but for a progressive goal. There is no dearth of Pakistani writers, artists, poets, and intellectuals who are not only continuing with their creative work, but also are readying people to stand up to the country’s challenges – especially the monster of religious bigotry. Another relevant example is the many women who are joining Pakistan’s army and air force as soldiers and fighter pilots, something inconceivable for many Pakistanis just a decade ago due to cultural as well as dogmatic religious worldviews. Lastly, the gallant and heroic way in which Benazir Bhutto embraced death while challenging extremists publicly and repeatedly – knowing exactly how fatal that could be – presents yet another picture. This is the picture of hope and change that Pakistanis are calling “Umeed-e-Sehr,” the hope of a new dawn.

Indeed, the question is which picture is the real Pakistan: those crazy militants who cherish beheading opponents and flogging women or those who stand for a pluralistic, progressive, and democratic Pakistan. The answer is both. Those who accept nothing but hard statistical data should just look at the voting pattern in the 2008 national and elections: the comparatively liberal Pakistan People’s Party (PPP), Awami National Party (ANP), and Muttihada Qaumi Movement (MQM) received significantly more votes than the religious political parties, all of which were trounced. Those parties are, of course, not without fault, and a large bloc of votes also went to such centrist parties as the Nawaz Sharif-led Muslim League, which runs Punjab, the country’s largest province. Although the overall political trends are on the positive side, there is certainly increasing stress and strain. And unless these forces are nurtured, supported, and strengthened, there is no guarantee that Talibanization and extremism will be confined to certain areas or eliminated.

In this scheme of things, American-Pakistani relations are a very important part of the puzzle. It is a puzzle in the sense that despite a long history of relations, including times when Pakistan was called the “most allied-ally” and occasions when it became “the most sanctioned state,” both states distrust each other. The bilateral dealings are increasingly fraught with resentment, miscommunication, and a sense of caginess. Senate Foreign Relations Committee chairman John F. Kerry and ranking Republican Dick Lugar, while introducing legislation on May 4, 2009, to put into effect key elements of President Obama’s new strategy in Pakistan and Afghanistan, framed the problem aptly when they said: “The status quo is not working: the United States believes it is paying too much and getting too little – and most Pakistanis believe exactly the opposite.* The new bill, if approved by Congress, will triple nonmilitary assistance to Pakistan to $1.5 billion annually for the next five years to help the country stabilize.

An earlier bill with the same intent, the one introduced by chairman of the House Foreign Affairs Committee Howard Berman, had a long list of conditions attached to it. This list drew scathing criticism from Pakistani officials, who sent the clear message that they would not accept the aid package with such strings attached. One condition related to the terrorism issue read as: “Pakistan has to certify that there is no activity taking place against India.* Richard Holbrooke, the administration’s special envoy to Pakistan and Afghanistan, and Adm. Mike Mullen, chairman of the Joint Chiefs of Staff, visited Pakistan together in early April 2009 after these proposed conditions were made known to Pakistan government. The well-informed Shuja Nawaz, director of the Atlantic Council’s South Asia Center, explains what happened during the visit: “This is probably the worst-ever visit by an American team to South Asia in history. … It was a complete disaster. And if this is how you want to win friends, I just wonder how you want to create enemies.” He also cautioned Washington policy makers that, potentially, American-Pakistan relations were heading for a train wreck.* Thankfully, a crisis-in-the-making was duly averted.

However the question remains: How can one make certain that a legitimate and reasonable oversight of the funding and support is provided to those sectors where help is needed the most? To build a deeper, sustainable, and long-term strategic engagement with the people of Pakistan, the United States must learn from its past mistakes and should not shy away from accepting its past missteps. Secretary of State Hilary Clinton deserves credit for saying what Pakistanis have been expecting to hear since late 2001. In an appearance before a subcommittee of the House Appropriations Committee on April 23, 2009, she stated: “We can point fingers at the Pakistanis. … But the problems we face now to some extent we have to take responsibility for, having contributed to it. We also have a history of kind of moving in and out of Pakistan. … Let’s remember here … the people we are fighting today we funded them twenty years ago …”* While this honest acknowledgement made juicy news headlines in Pakistan, it should go a long way toward mending the relationship. From the American perspective, however, this also means more caution about which Pakistani institutions the United States will invest in and, at the end of the day, who will be held accountable for auditing and monitoring the funds’ disbursement.

This brief report seeks to propose exactly that, after first discussing the variables that are having a potent (both negative and positive) impact on the Pakistani polity, in order to understand the history and dynamics of the malaise afflicting the country today. This is not meant to be a short history of Pakistan, for I will refer briefly only to those factors, issues, and events that, in my view, define the Pakistani identity today. Understanding that context is an absolute necessity for those who wish to help Pakistan survive and emerge as a modern democratic Muslim state.

Pakistan is a divided nation today and, as Professor Adil Najam insightfully says, it is “a democratic society trapped inside an undemocratic state.” In the West, Pakistan army is still seen as an institution that can stabilize things if need be. Perhaps, that is why TIME magazine profiled Pakistan’s army chief General Ashfaq Pervez Kiani as being among the most influential 100 people in the world today in the category of “Leaders and Revolutionaries.”* The one who also deserves to be profiled internationally is Afzal Lala, a now-legendary Pashtun politician associated with the Awami National Party (ANP) who, despite all the threats, is staying in Swat in his home defying the writ of the blood-thirsty Tehrik-e-Taliban Pakistan (TTP).*

Some recently published reports by American think tanks are very useful, especially in terms of devising recommendations for directing Pakistan and American policy for this study. These include publications from Center for American Progress (A New Policy Towards Pakistan [September 2008]); Network 20/20 (A Different Kind of Partner: A Paradigm for Democracy and Counter-Terrorism in Pakistan [October 2008]); The Atlantic Council of the United States (Needed: A Comprehensive U.S. Policy Towards Pakistan [February 2009]); the Carnegie Endowment (Reforming the Intelligence Agencies in Pakistan’s Transitional Democracy [March 2009]), and the Asia Society (How to Stabilize Afghanistan, Pakistan [April 2009]). Three books that inspired this study’s theme are also worth mentioning here: Paul Collier’s The Bottom Billion: Why the Poorest Countries are Failing and What Can be Done about It (Oxford University Press: 2008); Ashraf Ghani and Clare Lockhart’s Fixing Failed States: A Framework for Rebuilding a Fractured World (Oxford University Press: 2008); and, finally, one edited by Robert I. Rotberg, When States Fail: Causes and Consequences (Princeton University Press: 2003).

A pertinent quote from Professor Robert I. Rotberg’s introductory chapter in the above mentioned book, provides a useful framework for this study: He maintains that weak states (or states in crisis) “may be inherently weak because of geographical, physical or fundamental economic constraints; or they may be basically strong, but temporarily or situationally weak because of internal antagonisms, management flaws, greed, despotism, or external attacks. Weak states typically harbor ethnic, religious, linguistic, or other intercommunal tensions… Urban crime rates tend to be high and increasing. … Schools and hospitals show sign of neglect, … . GDP per capita and other critical economic indicators have fallen or are falling… . Weak states usually honor rule of law precepts in the breach.” As per these criterions, Pakistan is a weak state in essence. By definition, internal corrective measures and international support can rescue such states.

* All references included in the full report