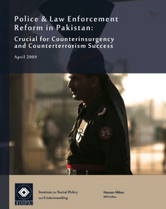 It is a globally recognized fact that a state’s police and law enforcement agencies play a critical role as the first line of defense against the threats of terrorism and insurgencies. An informative RAND study titled How Terrorist Groups End provides evidence that effective police and intelligence work, rather than the use of military force, deliver better counterterrorism results.* Based on this conclusion, the report suggested to U.S. policymakers that they stop using the phrase “war on terrorism,” because there is no battlefield solution to defeating terrorists. Another valuable study analyzing the police role in counterinsurgency campaigns in Malaya and Cyprus concluded that nearly all major twentieth-century counterinsurgency campaigns relied heavily on indigenous police as well as military forces.*

Both studies are very relevant to the terrorism and insurgency crisis faced by Pakistan today.* Many security experts rightfully contend that both Pakistan and Afghanistan are facing a growing Taliban insurgency in the Pak-Afghan tribal belt – some even call it a Pashtun insurgency.* According to Kelev I. Sepp’s Best Practices in Counterinsurgency, which closely studied seventeen insurgencies, the role of the police is always central to any successful counterinsurgency measures.* His recommended measures for insurgency hit areas emphasize “police in the lead” with the military providing backup support and strengthening the police with diversified training capabilities to help meet the security needs of the at-risk population.

Since 9/11 and the consequent US/NATO military action in Afghanistan, Pakistan’s troubled northwestern frontier has come under increasing pressure from militant and terrorist organizations operating in the area. Pakistan’s deficient and flawed law enforcement capacity in the Federally Administered Tribal Areas (FATA) and the adjacent North West Frontier Province (NWFP) have helped Pakistani Taliban and other terrorist groups expand their influence and strongly challenge the state’s writ. Outgunned and outfinanced, on average 400 police officers have been killed every year in terrorist attacks since 2005.* Controversial and haphazard Pakistani military action in the area has led to more instability, and limited resistance in FATA has now become a growing ethnic insurgency. As is clear from the turmoil in the NWFP’s Swat district, any army action can provide no more than a breathing space to the state; only police and law enforcement actions can help the state reestablish its writ and stabilize the area. A timely police action can be more effective in quelling emergent insurgencies. My research into the 2007 Lal Masjid (Red Mosque) crisis in Islamabad, where a strong military operation led to hundreds of deaths and dozens of retaliatory suicide attacks, also indicates that: (a) an effective police action in time (2004-05) could have avoided the later bloody clash and (b) the police lacked authority and the permission of the state and its important institutions to legally pursue the rebel clerics in the mosque (during the 2004-07 timeframe).*

The police infrastructure is one of Pakistan’s most poorly managed organizations. It is aptly described as ill-equipped, poorly trained, deeply politicized, and chronically corrupt.* It has performed well in certain operations; overall, however, that is a rare phenomenon. Arguably, the primary reason for this state of affairs is the government’s persistent failure to invest in law enforcement reform and modernization. It is ironic that despite frequent internal crises since its inception in 1947, ranging from ethnic confrontations and sectarian battles to a sharp rise in criminal activity and growing insurgencies, both political and military policymakers have never given this sector top priority. Hence, poor police performance in counterterrorism and counterinsurgency is not surprising. The fact that the police successfully challenged some militant religious groups in Punjab and tackled an insurgency-like situation in Karachi in the late 1990s shows that they do have the potential to deliver the desired results when political support is present and resources are provided. Clearly, better policing standards and performance will add to the government’s credibility and establish its writ more effectively in areas that are currently slipping out of its hands. Learning lessons from what transpired in the NWFP in recent years especially in order to plan for any preemptive law enforcement actions in South Punjab, where banned local militant groups like Sipah-e-Sahaba and Jaish-e-Mohammad are resurgent, is the need of the hour.

Historically, US support for Pakistan has always been skewed in favor of country’s defense needs – heavy guns, tanks, officers’ training and fighter aircrafts, etc. It made some sense given the nature of external threats and regional instability – ranging from Soviet expansionist designs to Indian hegemonic tendencies – but now its all together a different ball game. The internal threat to Pakistan today from extremists is more severe than anything Pakistan has witnessed in 60 years of its existence (perhaps with the exception of civil war in East Pakistan 1969-1971, now Bangladesh). Bush administration as well as Musharraf regime failed to understand what this really meant – through there was no shortage of rhetoric on the subject. Evidently, from 2002-2008, only the thinnest slice of US funds for Pakistan went to policing.* More specifically, in 2007 for instance, the US allocated $731 million to help the country’s military and only $4.9 million for its police.*

This policy paper makes the case for international support for police reform in Pakistan to enhance its law enforcement and counterinsurgency capacities. The Obama administration’s proposed $1.5 billion annual aid package for Pakistan for the next five years must also include sufficient resources for this sector. To build schools and hospitals, create jobs and spur economic development, security environment in Pakistan has to improve significantly.* Police and civilian law enforcement agencies are the most appropriate institutions to spearhead that effort countrywide. Rule of law besides requiring an effective criminal justice system and independent judiciary also needs a competent law enforcement infrastructure. If U.S. funds will make all that happen, it will correspondingly lead to its better image in Pakistan. Democratic institutions in turn will also benefit as their dependence on military for internal law and order duties will lessen.

* All references included in the full report