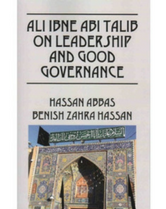 This book is a collection of Imam Ali Ibne Abi Talib’s policy statements on the role and responsibilities of political leadership for good governance. Important administrative policy initiatives taken by Imam Ali and his guidelines for effective government as advocated in his writings and lectures to various governors and senior officials are the primarily focus of this work. The work benefits from extensive research sources and a reference is provided for every statement. Language has been kept simple while remaining loyal to the original tone, as authors have young readers in mind also. Imam Ali was both an educationist and a practitioner. His writings and speeches, especially during his time as Caliph (656 – 661 A.D), speak volumes about his progressive political vision. A just order founded on rational thinking, tolerance and equality was his ultimate goal. Special emphasis on the need for education was another critical pillar of his philosophy. He was looking much beyond his age and hence he built the intellectual foundations of a model government for future. The emphasis was on nurturing leaders, humane and accountable, who would establish institutions and focus primarily on the well being of the ordinary people. In that sense his teachings are valuable for any student of politics and government anywhere in the world.