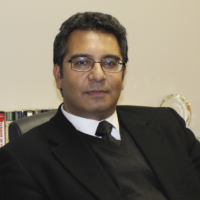 Saeed A. Khan is currently in the Department of History and Lecturer in the Department of Near East & Asian Studies at Wayne State University-Detroit, Michigan, where he teaches Islamic and Middle East History, Islamic Civilizations and History of Islamic Political Thought. Mr. Khan is also a Research Fellow at Wayne State University’s Center for the Study of Citizenship. He is also Adjunct Professor in Islamic Studies at the University of Detroit-Mercy and at Rochester College, co-teaching a course on Muslim-Christian Diversity.

With areas of focus including US policy, globalization, Middle East and Islamic Studies, as well as genomics and bioethics, Mr. Khan has been a contributor to several media agencies, such as C-Span, NPR, Voice of America and the National Press Club, as well as newspapers and other outlets, and is also a consultant on Islamic and Middle East affairs for the BBC and the CBC. In addition, he has served as consultant to the US-Arab Economic Forum. Mr. Khan has founded the Center for the Study of Trans-Atlantic Diasporas, a think tank and policy center examining and comparing the condition of ethnic immigrant groups in North America and Europe, consulting the US and UK governments on their respective Muslim communities. Most recently, Mr. Khan has become co-host of the radio show “Detroit Today” on Detroit Public Radio.

Free Speech and Security: Two Sides to a Three-Way Coin

Turkey’s Referendum and Constitutional Change: Back to the Future?