Manufacturing Bigotry: A State-By-State Legislative Effort to Pushback against 2050 by Targeting Muslims and Other Minorities 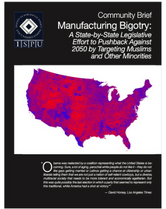 Manufacturing Bigotry: A State-By-State Legislative Effort to Pushback against 2050 by Targeting Muslims and Other Minorities

Demographics in the United States are changing rapidly, and the 2012 presidential election was a clear illustration of the Unites States' movement toward a more diverse population. Forecasts indicate by 2050, or even 2043 the United States will not only be more populous, it will also be a 'majority-minority' country. These demographic shifts will have major political, socio-economic, legal, and cultural impacts on public discourse and public policy.

As certain groups—historically marginalized for their race, ethnicity/national origin, gender, sexual orientation, civic affiliation, or religious beliefs—become more visible, it is evoking a backlash from some who are eager to slow or reverse these groups' growing political and legal enfranchisement. In this community brief, the Institute for Social Policy and Understanding (ISPU) summarizes the research and documentation of state-level legislative efforts to disenfranchise historically marginalized groups.

To empirically measure the attempted disenfranchisement against these various groups, and links between efforts to roll back their rights, we examined bills in all 50 U.S. state legislatures from 2011 to 2013, across six issue areas: 1) Restrictions on abortion rights and access, 2) 'Defense of Marriage Act' bills (DOMA) and other bans on same-sex marriage, 3) Right-to-Work legislation, 4) Anti-immigration proposals, 5) 'Voter Identification' requirements, and 6) Anti-Sharia/Anti-'Foreign Law' bills (which serve as the report's legislative vehicle to measure Islamophobia).