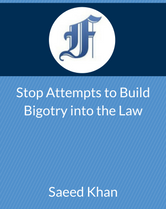 The toxicity of this year’s election cycle is unprecedented in recent memory. Calls to ban Muslims, build walls to exclude immigrants, and deport others have now become acceptable policy recommendations for candidates and those who support them.

Still, despite the daily rancor broadcast over the airwaves as the November presidential election approaches, the true battleground over bigotry has been the state legislatures throughout the country, where efforts have been under way for at least five years to achieve by law what is being expressed as campaign rhetoric today.

Anti-Sharia laws are a case in point. Cast by supporters as a defense against the impending threat of Islamic law taking over the state, they in fact just restrict Muslims’ religious freedom by limiting the practice of their faith in personal legal matters.

While this type of legislation may be motivated by Islamophobia, there is evidence that these laws are often part of a broader legislative agenda to impact a variety of demographic groups.

Perhaps the best evidence of this strategy was seen in North Carolina in 2013. Emboldened by the first Republican-majority legislature since Reconstruction and the election of a Republican governor, legislators in the Tar Heel State passed HB695, the Family Faith and Freedom Protection Act. The bill was specifically intended to ban the consideration of Islamic law (Sharia) by North Carolina courts. However, while the political debates surrounding the bill focused on the alleged specter of Sharia, the primary purpose of the legislative effort seemed nefariously different.

Moments before voting on HB695, the state Senate attached an amendment to the bill that would severely restrict a woman’s access to reproductive health care. Gov. Pat McCrory subsequently signed the bill into law. One may reasonable infer that the eleventh-hour anti-abortion measures tacked onto HB695 were a more pressing objective than combating the purported invasion of Islamic law into North Carolina. By capitalizing on the kind of Islamophobia that is today part of public and political discourse, the state Senate was able to achieve its goal of passing restrictive legislation affecting women.

While American Muslims like those in North Carolina may be an easy target, given the size of their population (30,000 in the Tar Heel State) and relatively weak political influence, laws that ostensibly impact their lives can serve as a cloak for lawmakers seeking to limit the rights of other groups. In fact, 80% of 102 anti-Sharia bills introduced between 2011 and 2013 were sponsored or co-sponsored by a legislator who supported other rights-restricting laws.  Most notably these included voter ID and right-to-work laws, measures that impact disproportionately on the rights of other groups including Latinos, African-Americans and women.

The sleight-of-hand that led to the passing of HB695 was hardly an anomaly for North Carolina. In fact, it served as precedent for this year’s HB2 law, the Public Facilities Privacy & Security Act. Many contend that it is the most anti-LGBTQ law in the nation, with its primary target being the transgender community. Notwithstanding the provision that restricts transgender access to public restrooms of their choice, the law has deeper implications. HB2 also prohibits municipalities from enacting anti-discrimination ordinances.

In a 2014 report, “Manufacturing Bigotry,” the Institute for Social Policy and Understanding (ISPU) found that some states, especially those with Republican-controlled legislatures, were engaged in a systematic agenda that restricted the rights of various demographic groups based upon race, ethnicity, immigrant status, religion, sexual identity, gender and even union membership.

While ISPU’s map demonstrates efforts being made to limit the rights of predominantly minority populations, such connectedness should offer hope as well. Members of these impacted groups may gain some solace that they are not alone in experiencing an erosion of their civil liberties and civil rights; more importantly, however, is the fact that through this collective stigmatization and experience, these groups are well equipped to form a united alliance with shared empathy and purpose to combat restrictive legislation irrespective of its target. Such an alliance would also present an effective response to those trying to pit the Muslim and LGBT communities against one another in the wake of the senseless shooting at a gay night club in Orlando.

America has always championed civic and political engagement as a check upon — and antidote to — discriminatory legislative agendas. As the nation lurches toward yet another Election Day, ISPU’s map provides solution-seeking evidence to those working to organize their communities in an effort to restore their rights.

Saeed A. Khan is a lecturer in the Department of Near Eastern and Asian Studies at Wayne State University, a Fellow at the Institute for Social Policy and Understanding and co-author of the institute’s report “Manufacturing Bigotry.”

This article originally appeared in the Detroit Free Press