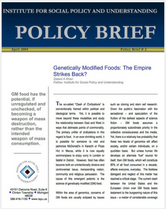 The so-called “Clash of Civilizations” is conventionally framed within political and ideological terms.  Yet, it is possible to move beyond these modalities and study the relationship between East and West in ways that delineate points of commonality. The primary unifier of civilizations in this regard is food.  In an ever shrinking world, it is possible for someone to visit and patronize McDonald’s in Karachi or Pizza Hut in Mecca, while it is now equally commonplace to enjoy curry in London or falafel in Detroit.  However, food has often become both an unintentionally divisive and controversial issue, transcending nation, community and religious persuasion.  The cause of this emergent polemic is the science of genetically modified (GM) food.

Within the area of genomics, concerns of GM foods are usually eclipsed by issues such as cloning and stem cell research. Given the public’s fascination with the sensational – and speculation of the fruition of the darkest aspects of science fiction – GM foods assumes a proportionately subordinate priority in the collective consciousness and the media. Yet, there is a relatively low probability that these two facets of genomics will affect society, and/or certain individuals, on a quotidian basis.  But unless human life develops an alternate “fuel” source for itself, then GM foods, which will constitute 90% of all food consumed in a decade, affects everyone, everyday.  The feckless disregard and neglect of this matter has reached a critical stage.  The current clash between the United States and the European Union over GM foods bears testament to the burgeoning nature of this issue – a matter of considerable coverage east of the Atlantic and relative silence to its west – but a controversy that will nonetheless reach the developing world, and with consequences far greater than mere trade disputes or differences of perspective.  The gravity of the situation is reflected by its intra – and intercivilizational scope.

As a high percentage of the developing world is rooted within an agrarian society, agro-economics plays a critical role in the viability of the various countries involved.  The vast majority of food consumed today is genetically modified in some form or the other. Seeds are the elemental units for this technology, and are the device for a potentially devastating impact on already fragile economies.

The pace of technology has overtaken the ability to thoughtfully address the economic, ethical and social issues of GM food.  Inhabitants in the West have an imperative, and ability, to challenge and effectuate policy to prevent both “economic colonization” of developing countries as well as adverse consequences on the domestic level.