Around 12% of Muslim respondents identify as self-employed, compared with 7% of Illinois general public respondents. As part of our survey, we asked people who reported being self-employed or owning a business how many people they employed. By using this data and projecting to the entire population of Illinois Muslim adults [10], estimated to be 220,000, we find that Muslims in Illinois create more than 350,000 jobs–that’s nearly 6% of all jobs in Illinois while Muslims make up only 2.8% of the population. However, it is also important to note that 20% of Muslims in our sample are unemployed, which presents a need.

Around 12% of Muslim respondents identify as self-employed, compared with 7% of Illinois general public respondents. As part of our survey, we asked people who reported being self-employed or owning a business how many people they employed. By using this data and projecting to the entire population of Illinois Muslim adults [10], estimated to be 220,000, we find that Muslims in Illinois create more than 350,000 jobs–that’s nearly 6% of all jobs in Illinois while Muslims make up only 2.8% of the population. However, it is also important to note that 20% of Muslims in our sample are unemployed, which presents a need.

In terms of type of work, one-fifth of the of the Muslim sample (21%) reported they work in healthcare. Eleven percent stated they work in each of the following categories: Education, Business, and Technology (that wasn’t engineering). In addition, around 50% of Muslim respondents reported that they had an annual income that was greater than $100k before taxes. Twenty percent made between $25k and $50k, and around 31% of respondents made between $50k and $100k. In the Illinois general public sample, by comparison, 21% made below $25k, 27% made between $25 and $50k, and 16% made above $100k. This discrepancy in income was also reflected in the rates at which social welfare programs were accessed in the Muslim sample vs. the Illinois general public sample. ISPU national surveys show that roughly 35% of Muslims make $30,000 or less while 18% make $100K or more, suggesting our sample overrepresents the rich and underrepresents the poor. We took this into account as we analyzed the data and addressed it in our focus groups. 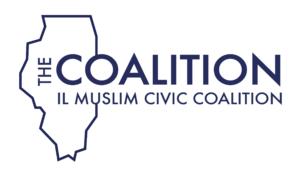 Moreover, about a third (32%) of Muslim respondents have volunteered for a political candidate at some point in their lives, compared with 24% of Illinois general public respondents. This engagement extends to communication with elected officials even after the election is over. Roughly 30% of Muslim respondents stated they have contacted their federal elected officials, and the same report contacting their local elected officials in the last year. This is similar to the general public where 23% and 25% of Illinois general public respondents, respectively, said the same. This trend is seen nationally as well; nationally, Muslims are more likely to attend town hall meetings (22%), compared with Jews or Catholics (both at 18%) [11].

When comparing the experiences of Muslim faith groups with other faith groups in terms of creation of spaces of worship, more than one-third (39%) of respondents in the Muslim sample reported that their house of worship experienced significant resistance within their local community to move, build, or expand their mosque. Interestingly, a similar percentage of the general public reported the same challenge. However, the general public was more likely to not have a need to seek permission, with 46% of Illinois general public respondents stating that they did not seek approval from the city or zoning board, compared to 30% of the Muslim sample. This suggests that Muslims are not more likely than Illinois residents of other faiths to face city or zoning board resistance when building or expanding their house of worship but are also more likely to face the situation of needing to seek permission, perhaps due to a more rapidly growing community. This may present an opportunity for greater interfaith cooperation when faith communities are seeking to build or expand their houses of worship. To learn more about the resistance Muslim communities sometimes face when seeking to build or expand their house of worship, see ISPU’s report Countering Anti-Muslim Opposition to Mosque and Islamic Center Construction and Expansion.

“In my view the greatest challenge is Islamophobia which is causing a security issue for Muslims. Being an Imam, we had to hire a security guy to protect us… It is hard for me when we have a security guy who is armed. He must be present at the door when people come to worship and it’s hard to see him when children come and they ask why he has to be here… Just to have him we feel insecure. When will we feel safe again to go back to normal?” – White male focus group participant

“Racism. Anti-black racism. Clear cut between African American Muslims and Muslims from South Asia. Family is from Sudan. We identify as black; we are African. Being in that space, I’m aware of the fault lines. Anti-black racism and racism in general: class division between aspiring middle class/upper class life in the US and the values connected to that. Lack of solidarity with working class people across racial and religious grounds. Biggest fault lines.” – African American focus group participant

Muslim respondents were just as likely as the Illinois general public respondents to be victims of hate crimes (9% vs. 10% respectively). These results point to the need for greater support for all vulnerable communities against bias-inspired crimes and an opportunity for coalition building.

Forty-one percent of Illinois Muslim sample respondents stated they have a child between kindergarten and twelfth grade. Of those respondents with school-age children, 80% stated their child attends a public school, 10% attend a private non-Muslim school, and the remaining 11% attend a Muslim school.

Finally, it was found that Muslim respondents’ children who were bullied were most often bullied by their own peers (68%) while 10% said a teacher did the bullying and 5% said the bullying was anonymous.

The survey and focus group results presented in this report describe a vibrant and diverse Muslim community in Illinois—a community that brings tremendous assets to Illinois’ civic, economic, and cultural spheres, yet also has important and urgent needs. Based on the assets and needs identified in this research, we offer the following recommendations for specific stakeholders.