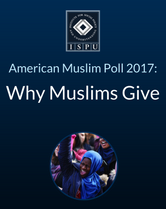 Charitable giving is an essential component of many faith traditions. It is not surprising, then, that the religiously affiliated and those who regularly attend religious services tend to donate more often than their non-affiliated or less religious counterparts. What’s more, although the proportion of donations to religious nonprofits has decreased over time, they remain far and away the top recipients of American donors’ dollars.

Given this strong link between religion and philanthropy, ISPU’s 2017 American Muslim Poll gauged various major faith groups’ penchant for giving. Our report tallied the responses to two different questions: the first asked whether a respondent had donated money to any religious cause or institution in the last year, and the second asked those who did donate to specify the target(s) of their contribution.

So what drives American Muslim philanthropic activity? More specifically, what factors divide those in our sample who did donate in the past year from those who did not? Figure 1 models the difference between these two groups, estimating the change in one’s probability of giving to a religious cause or institution as a function of key demographic, attitudinal, and behavioral variables.

The demographic traits included in the model influence charitable giving in the ways we would expect given prior research. 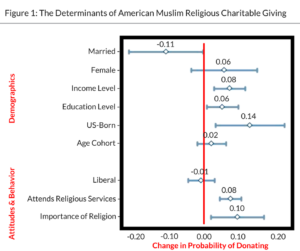 NOTE: The plotted results indicate the predicted change in the probability of donating as the variables of interest goes from lower to higher values (or in comparison to another category, as in the case of “US-Born” and “Female”). If the bars on either side of the point estimate (which represent the confidence intervals) cross the red line, then the effect for that variable is not statistically significant. For ease of presentation, racial background was included in the analysis, but not in the figure.

Not surprisingly, religiosity influences religious giving. Both higher levels of religious attendance and the importance of religion in one’s life are significantly correlated with donor activity. Indeed, the estimates in the graph are somewhat conservative given that the reported effects represent moving from one response level to the next. If instead we estimate going from the lowest level to the highest for each of these variables, then that the magnitude is literally off the chart (as presented). Those who never attend services are 40% less likely to donate than those who attend more than once a week, while those who feel religion is “very important” to their lives are 30% more likely to give money to religious organizations than those who say that religion is “not at all important.” Lastly, there is near absolute parity across the political ideological spectrum with virtually no difference between liberals and conservatives, all else equal.

This portrait of American Muslim philanthropy largely aligns with the workhorse model predicting charitable giving among the general public. Notably, however, our survey inquired about donations to religious causes and institutions, and so there remains room to further elaborate this model by incorporating American Muslims’ propensity to give to secular recipients.