Which Muslims Voted for Trump? 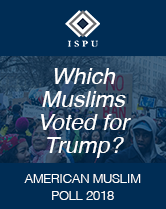 Which Muslims Voted for Trump?

If there is anything that three consecutive years of ISPU’s American Muslim Poll has shown, it is that Muslims are not a monolithic community. From racial and ethnic diversity to the various ways that individuals interact with society and each other, Muslims in America are decisively multifaceted. This variety of opinion and experience holds even when we would expect near uniformity, such as opposition to President Donald Trump.

From the start of his candidacy and into his presidency, Trump has targeted Muslims through rhetoric and policy. There is an extensive (though certainly not exhaustive) record of Trump’s incendiary comments on Islam and Muslims. And while the recently upheld travel ban stands out as the clearest example of his administration’s effort to institute policies that are, as Justice Sotomayor put it in her dissent, “motivated by hostility and animus toward the Muslim faith,” Trump has previously suggested that closing mosques and even instituting a Muslim registry is within the realm of consideration.

Despite this clear and consistent pattern, a portion of American Muslims still profess their support for President Trump. In its most recent poll, ISPU found that 13 percent of American Muslims approve of the way that Donald Trump is handling his job as president. While this percentage is significantly lower than the president’s approval among the general public—35 percent in our sample—it nonetheless leads us to ask: Who, exactly, are the Muslims that support Trump?

To answer this question, we examined the impact of socio-economic and demographic indicators, alongside partisanship, on Trump support. Figure 1 demonstrates that, all else equal, income, nativity (i.e., whether someone was born in the U.S. or elsewhere), age, and sex are surprisingly not associated with either Trump opposition or support among American Muslims. 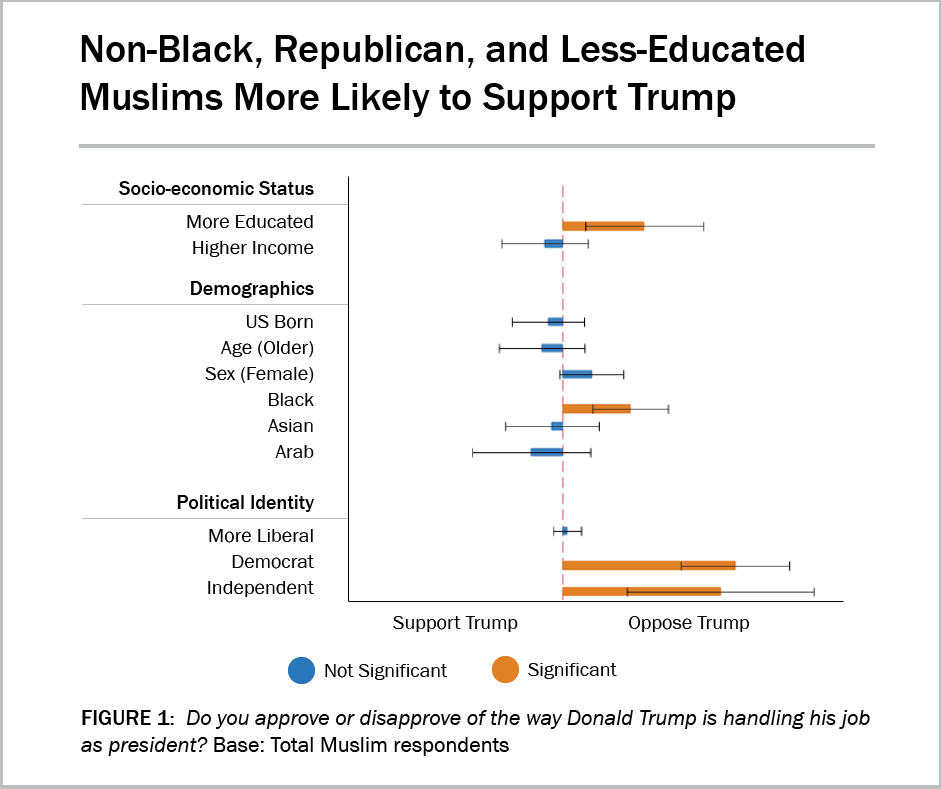 Muslims with a higher level of education, however, are significantly more likely to disapprove of the president’s time in office. Similarly, Black Muslims oppose Trump at a significantly higher rate than Muslims of other racial and ethnic backgrounds. Not surprisingly, the strongest correlate of Trump opposition is party identification. That is, Muslims who identify as Republican are significantly more likely than either Democrats or self-reported independents to support the president’s job performance.

Given the comparatively small percentage of Muslims that support Trump, it can be difficult to glean statistically significant differences between them and those Muslims that oppose the president. As a result, we can be more confident in the robustness of those correlates we did find; indeed, they are perhaps the most predictive of our current political era. First and foremost among these determinants is partisanship, which has been a particularly powerful psychological force in recent years in light of widening polarization. In addition, throughout Trump’s candidacy and presidency, education level has been an especially reliable indicator of political preference, with those who do not have any college experience much more likely to align with the Trump agenda.

One of the more exceptional and consistent factors among Trump supporters, however, is racial resentment. With that in mind, it is not surprising that Black Muslims are significantly less likely to approve of the president’s time in office compared to all other racial and ethnic groups. The results in Figure 2 further highlight this dynamic as it shows whether or not there is a link between support for Trump among Muslims and approval of the so-called “Muslim ban,” banning the building of mosques and surveillance of U.S. mosques. It also examines links between Muslim Trump support and the Islamophobia Index, mosque attendance, and the importance of religion in the respondent’s life. Among the policy positions or attitudes toward Islam and Muslims that this plot examines, only a higher score on the Islamophobia Index* evidences a statistically and substantively significant association with Trump support. That is, those Muslims who subscribe to negative stereotypes about their own community are more likely to approve of the president’s performance. 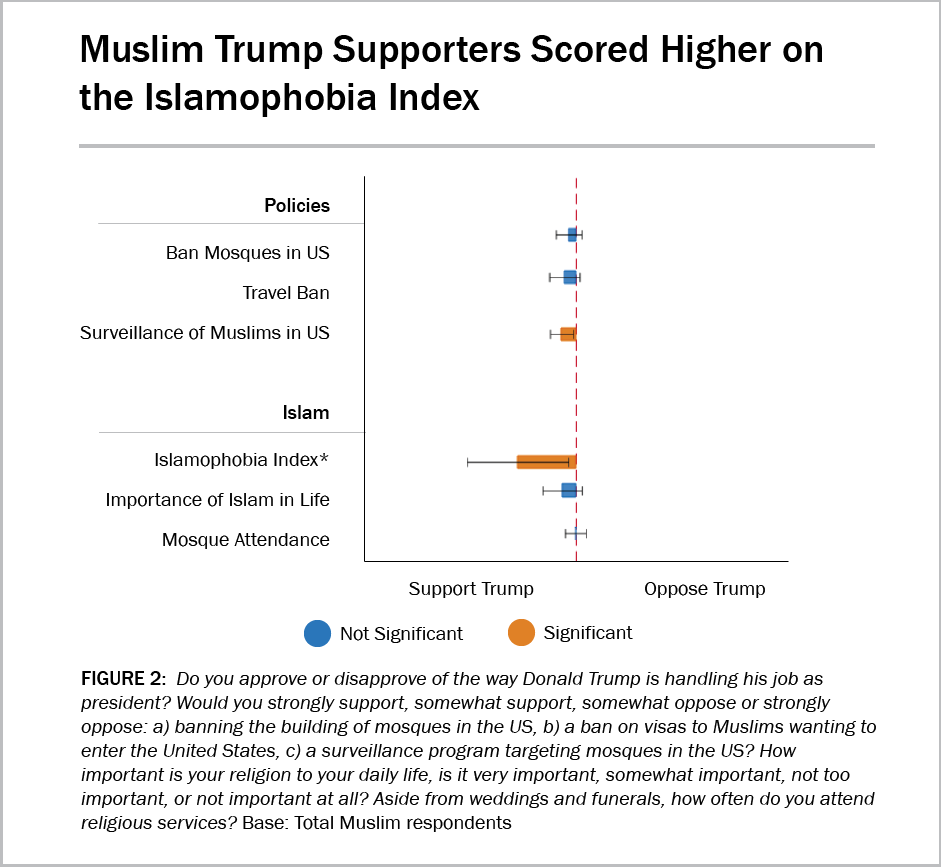 NOTE: The correlates above were modeled separately, controlling for all the variables in Figure 1.

Given that scholars and commentators have argued that Islamophobia is best understood as a subset of racist attitudes, the results in Figure 2 once again underscore how bigotry—even against one’s own community—motivates political preferences to a disturbing degree in our current climate. Taken together, the findings above also point to a rather ironic conclusion: Muslims who approve of Trump’s job performance are, in terms of demographics and attitudes, remarkably similar to any other contingent of the president’s supporters.

*The Islamophobia Index is an additive score ranging from 0 to 100 that measures anti-Muslim prejudice in America. It is based on the following questions: Please indicate how much you agree or disagree with the following statements. Most Muslims living in the US: a) are more prone to violence than other people, b) discriminate against women, c) are hostile to the United States, d) are less civilized than other people, e) are partially responsible for acts of violence carried out by other Muslims.