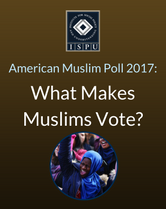 The 2016 election was supposed to be a political coming of age for the American Muslim voter. The received wisdom in the months leading up to November was that the nomination of Donald Trump—through a combination of fear and heightened civic duty—would drive record numbers of Muslims to the polls on election day. Such prognostications were buoyed by evidence of increased registration and mobilization efforts and multiple positive indicators of higher voter turnout borne of decades of electoral studies.

Yet, as with many predictions surrounding the 2016 presidential contest, things did not exactly go as expected. According to ISPU’s latest poll, about 68% of Muslim American citizens were registered to vote, while only a little over 61% voted in the election—the lowest proportion of any major faith group or the non-affiliated on both counts. Even when you account for other factors that likely affect one’s propensity to vote (standard demographics, party identification, political ideology, and religiosity), this discrepancy maintains. 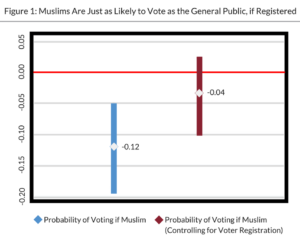 However, when you add voter registration status to the list of controls, Muslims are statistically just as likely as all others to have cast a ballot (see Figure 1). That is to say, among registered voters, Muslims voted at rates that are comparable to any other faith group or the non-affiliated. Thus, while getting eligible Muslim voters out to the polls on election day should not be discounted, getting them registered in the first place appears to be the more pressing concern.

What, then, determines the likelihood of an American Muslim being registered to vote, and are these the same determinants that predict voter turnout? Figure 2 models this pair of outcomes as a function of relevant demographics, attitudes, and behaviors. In terms of religiosity, mosque attendance and the importance of religion in one’s life each have consistent effects on both registration and voting behavior, yet they point in opposite directions. Though these findings initially seem contradictory, they actually align quite well with previous studies that have reported similar results when examining the role of Islam in motivating (or depressing) political participation. [1] 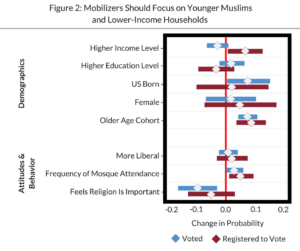 NOTE: The plotted results indicate the predicted change in the probability of either having voted or being registered to vote as the variables of interest goes from lower to higher values (or in comparison to another category, as in the case of “US-Born” and “Female”). If the bars on either side of the point estimate (which represent the confidence intervals) cross the red line, then the effect for that variable is not statistically significant. For ease of presentation, racial background was included in the analysis, but not in the figure.

Yet, for those engaged in voter registration and mobilization efforts, targeting individuals based on demographic data is a far more practical strategy. The results in Figure 2 reveal two groups that are worthy of particular focus:

Younger Muslims lag behind their older counterparts both in terms of voter registration and the propensity to vote, and so there is definitely opportunity to activate this demographic. Targeting lower income households would likely also yield a high rate of return on effort, given that individuals with this economic background are less likely to register but are more likely to go out and vote once they are registered. Sex, education, and political ideology all demonstrate insignificant effects with regard to either registration or voting. Ultimately, ISPU’s data highlights that there is still a lot of room for the American Muslim voter base to grow.