Towards a Peaceful Democratic Transition in Syria 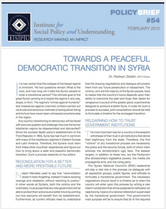 Towards a Peaceful Democratic Transition in Syria

It is now certain that the collapse of the Assad regime is imminent. Yet two questions remain: What is the cost, and how long will it take the Syrian people to enter a transitional period? The ultimate goal of the great Syrian uprising is to topple the regime in any way, shape, or form. The regime’s “crimes against humanity” and massacres against unarmed civilians carried out via brutal and atrocious methods of extrajudicial killing and torture have never been witnessed anywhere else in the region.

Any country transitioning to democracy will be faced with one core question and challenge: How can the former totalitarian regime be disassembled and dismantled? Since the socialist Baath party’s establishment of the Third Republic in 1963, Syria has had much in common with many of the totalitarian regimes in Eastern Europe and Latin America. Therefore, the Syrians must learn from these other countries’ experiences and figure out how to bring about a safer and peaceful democratic transition. Such a process depends on two pillars:

RECONCILIATION FOR A BETTER AND MORE PROFITABLE FUTURE

Nelson Mandela used to say that “reconciliation doesn’t mean forgetting, instead it means revoking revenge and retaliation without resorting to justice.” In other words all Syrians, both the victims and the victimizers, must accept that any new government will be able to protect them and ensure a better future by pointing out how everyone will benefit from its establishment. Furthermore, all current officials need to understand that the ensuing negotiations and dialogue will protect them from any future persecution or harassment. The victims, who are the majority of the Syrian people, have to realize that the country’s future depends upon their ability to overcome the past and forgo their desire for vengeance in pursuit of the greater good: a partnership designed to produce a better Syria. In order for such a process to succeed, joint consultations should be held to formulate a timeline for the envisaged transition.

RELEARNING HOW TO TRUST GOVERNMENT INSTITUTIONS

The most important loss for a country is the people’s withdrawal of their trust in all institutions that derive their legitimacy from the state. Therefore, the first “victims” of any transitional process are necessarily the police and the security forces, both of which often embody the dictatorship’s ugly face. The easiest targets, in addition to these two, are the Parliament (the dictatorship’s legislative power), the media (its propaganda arm), and the ruling party.

The Syrian National Council’s (SNC) leadership will play a vital role in this process via dialogues with all opposition groups, public figures, and officials to formulate a transitional government. The necessary negotiations should result in a timeline as to when the steps, which will begin with the interim constitution’s ratification by constitutional experts as well as legal and reformist politicians, have been completed. After this, the transitional government should develop a new law for elections and political parties, one that will lay out how the president and members of Parliament will be elected. After that, an independent national commission should direct and monitor the elections through judicial supervision and local and international observers. All of this will end in a multiparty system designed to allow all Syrians to make their opinions known.

Syria’s current political system is untenable, since it has no room for an elected president and parliamentary members and places no limits on the president’s authority. Another reason why it is untenable is because the existing Parliament can neither be controlled nor held accountable. Perhaps most important, the judicial branch and the media outlets need to become independent of government control. Given this reality, a freely elected Parliament will be faced with several major tasks: writing country will enter upon this process by writing a new interim constitution that will be subjected to ratification (or rejection) by means of a national referendum supervised by the transitional government. This government’s main purpose will be to ensure that all of the required a new democratic constitution, formulating new laws for elections and political parties, and ensuring that all media outlets and civil society associations are really free to pursue their missions.