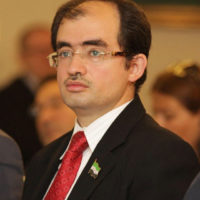 Dr. Ziadeh is the founder and director of the Damascus Center for Human Rights Studies in Syria and co-founder and executive director of the Syrian Center for Political and Strategic Studies in Washington, D.C. He is the managing editor of the Transitional Justice in the Arab World Project. Ziadeh was previously the editor-in- chief of Tyarat magazine (2001–2002) and secretary of the Syrian Organization for Transparency. He was a researcher with the UNDP’s Syria 2025 project and was named best political scientist researcher in the Arab world by Jordan’s Abdulhameed Shoman Foundation in 2004; in 2009 he was awarded the Middle East Studies Association (MESA) Academic Freedom award in Boston; and in 2010 he was awarded the Democracy Courage Tributes award on behalf of the Human Rights movement in Syria by the World Movement for Democracy at Jakarta- Indonesia.