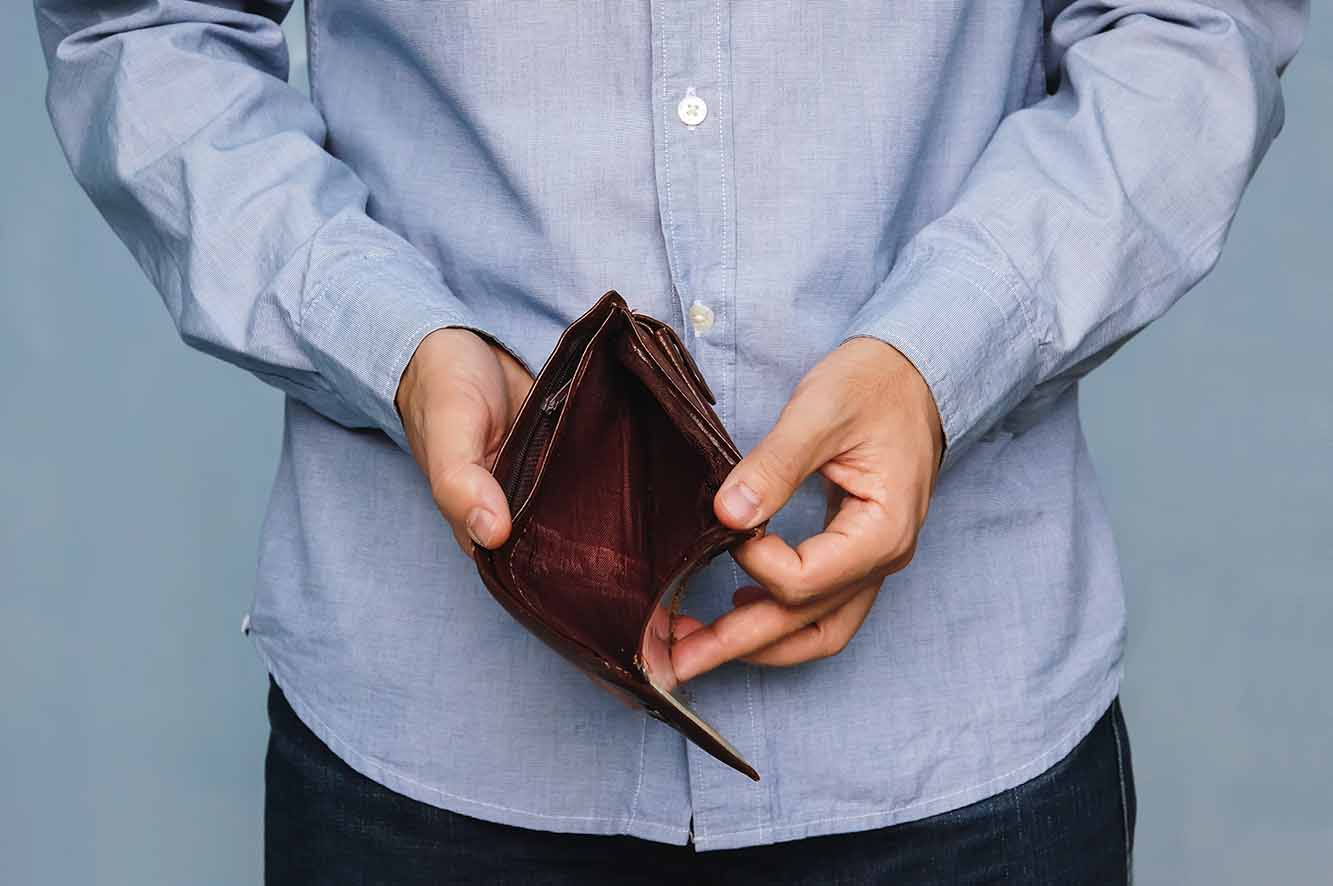 Last year, ISPU highlighted the difficult economic circumstances that many American Muslims face. We found that Muslims were the most likely faith community to report low income, with one third of Muslim households in America at or below the federal poverty level, making a combined annual income of less than $30,000. Data from the 2019 American Muslim Poll indicate that the previous finding was not anomalous, as 37% of Muslim households in the latest survey report incomes below $30,000 as compared to 26% in the general public (Figure 1). 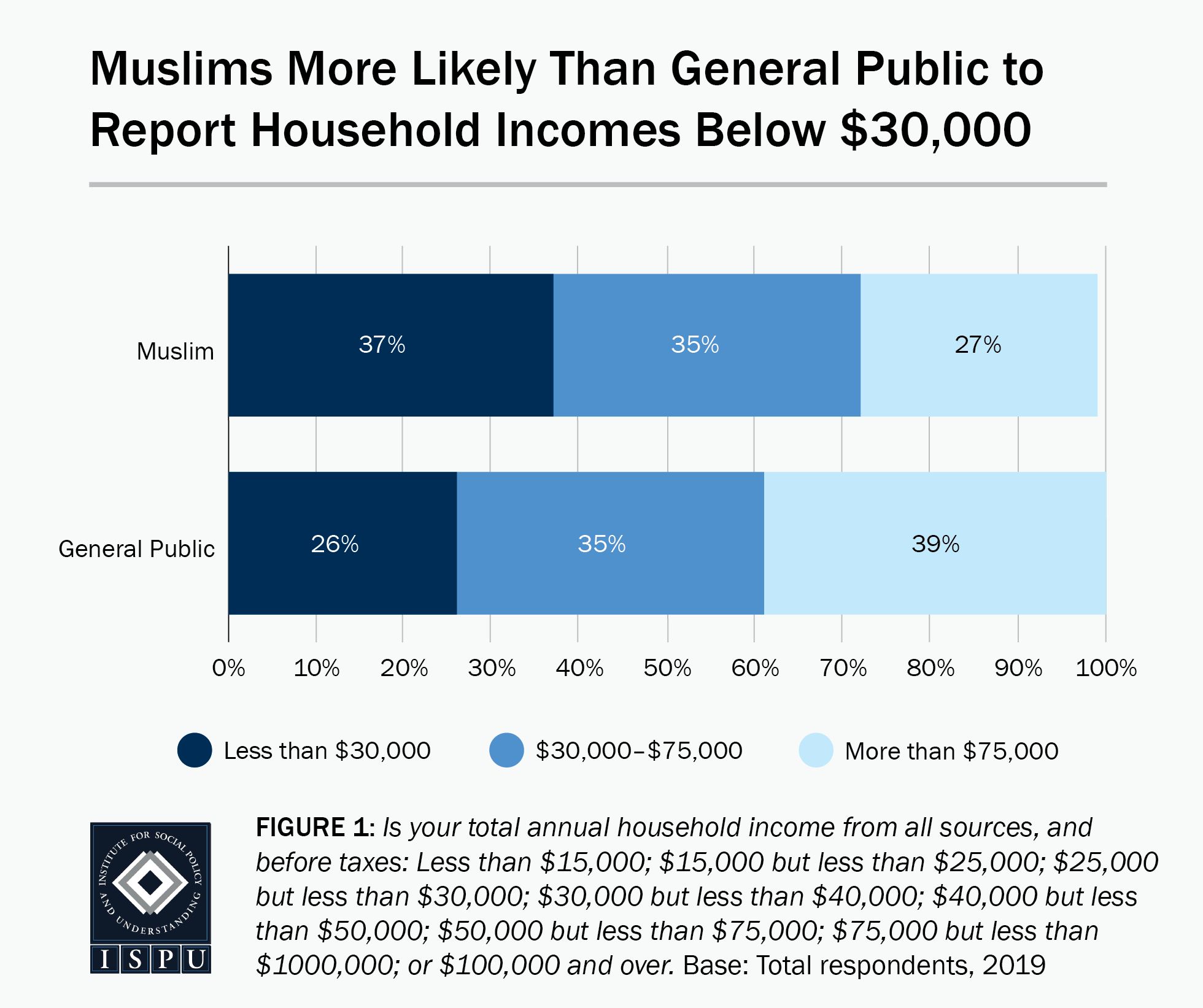 What Do American Muslims Believe about the Cause of Poverty?

American Muslims’ objective economic conditions compared to those of the general public only tell part of the story. Subjective perspectives on the causes of economic difficulty and assessment of their own personal finances can also be quite informative. For example, studies have shown that one’s belief in the root cause of poverty can strongly predict certain policy preferences. [1] Those who believe that poverty is primarily due to circumstances beyond one’s control are more likely to support redistributive policies than those who feel that individuals experiencing poverty are primarily responsible for their own economic condition. With regards to the role of religion, we find that even though Muslims who frequently attend religious services feel less poor, belief in the source of poverty is unassociated to this or any other metric of religiosity. Similarly, we found that sex, age, race, income level, and education don’t predict how a person views the source of poverty. The only significant predictors of whether or not Muslims believe that societal factors primarily drive poverty are political ideology and party identification, with conservatives and Republicans more likely to assign blame to the individual for their economic standing.

American Muslims are significantly more likely than the general public to believe that poverty is primarily due to circumstances beyond one’s control vs. an individual’s bad choices (Figure 2). When this issue is broken down by religious affiliation (Figure 3), however, Muslims are squarely aligned with most other groups with only Catholics and, to a greater extent, white Evangelicals holding a majority view that poverty is the result of individual actions. 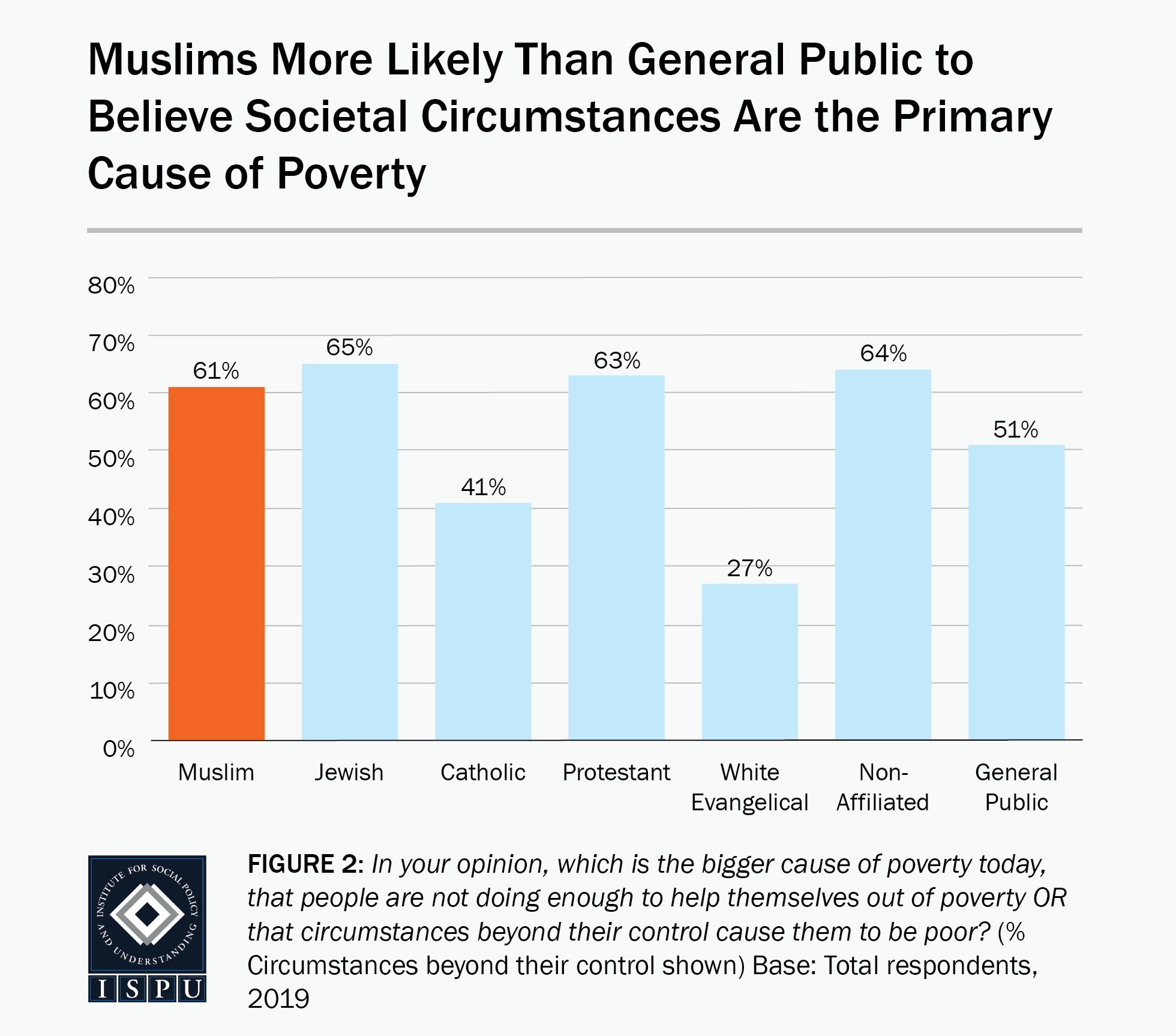 In terms of personal finances, Muslims’ subjective self-assessments are on average more positive than their objective conditions would indicate. When asked to classify their financial situation, Muslims are no less likely than any other group (with the exception of American Jews) to provide a rating of “good” or “excellent” despite being significantly more likely to earn a low income (Figure 4). Moreover, Muslims living in low income households make up a larger share of those rating their financial situation positively (22%) when compared to the general public (8%) (Figure 5). 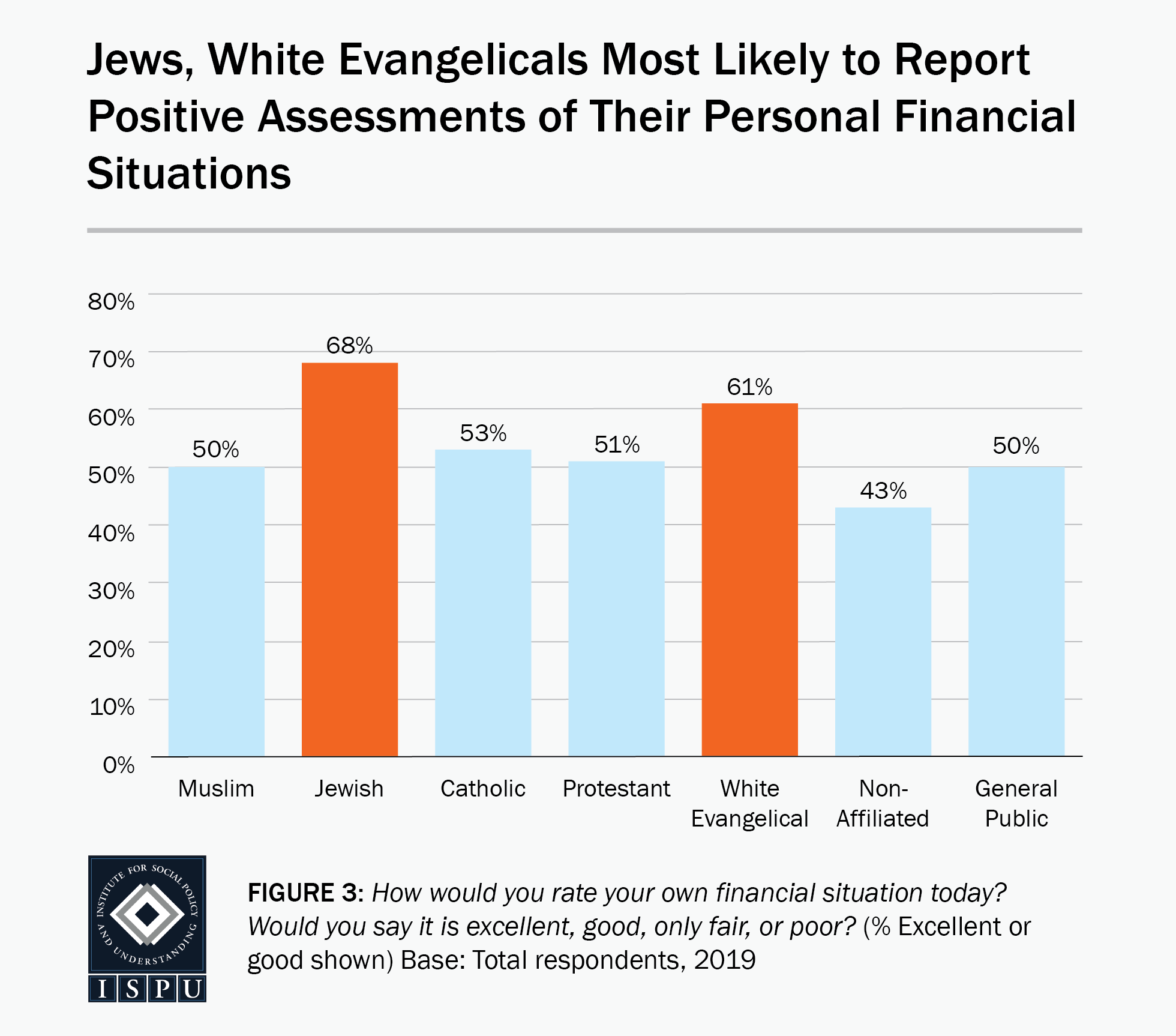 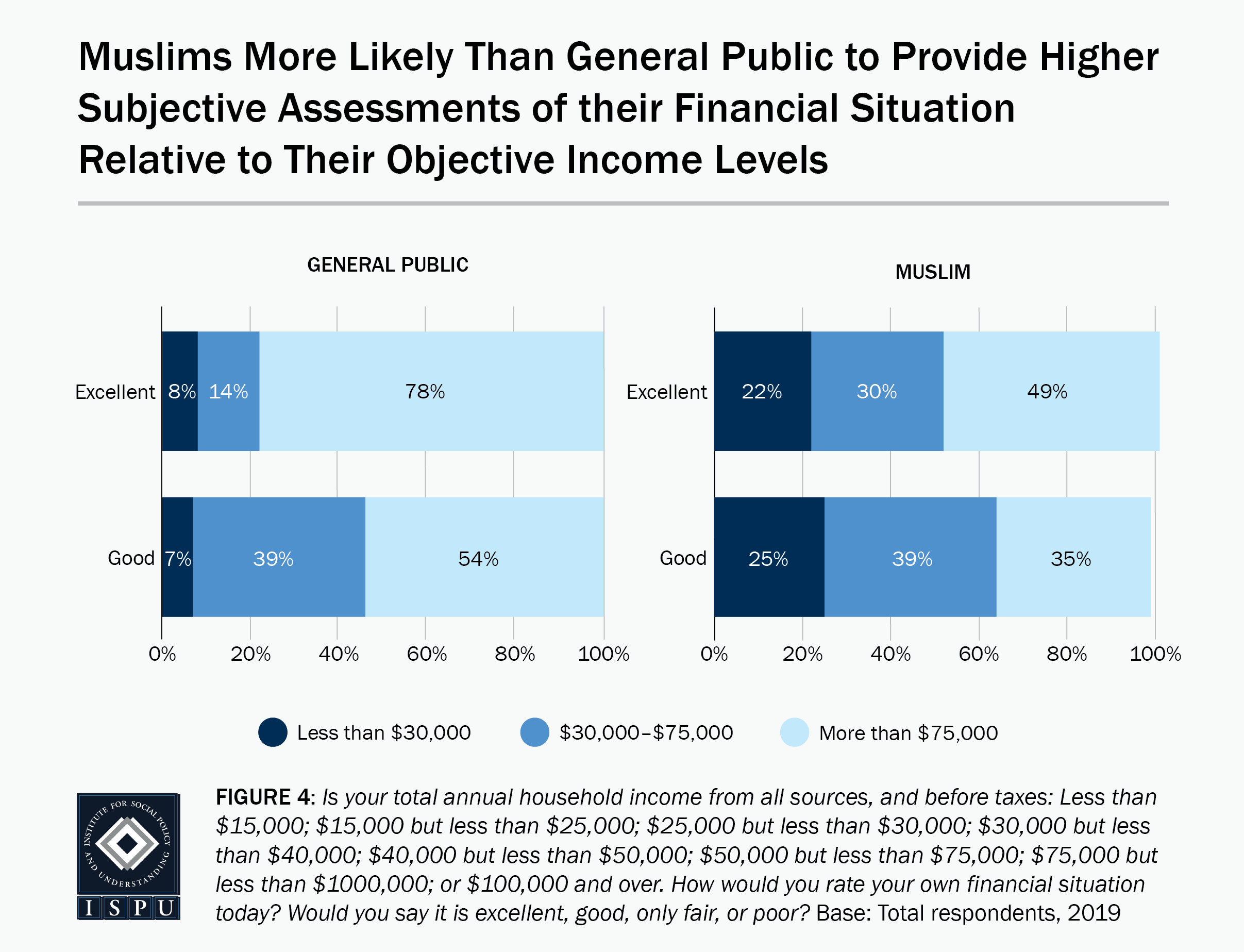 Although this fascinating finding requires further research to tease out the determinants and implications, one factor that we found significantly contributes to positive self-assessment among Muslims is weekly mosque attendance (controlling for income, race/ethnicity, age, and sex). Thus, religiosity continues to partly structure Muslim attitudes and perceptions even at a time when political and social identities are the prime movers of public opinion.

Youssef Chouhoud is an assistant professor of political science at Christopher Newport University, where he is affiliated with the Reiff Center for Human Rights and Conflict Resolution. He is an ISPU Scholar, the co-author of ISPU’s 2017 and 2018 American Muslim Polls, and the data analyst of the 2019 American Muslim Poll. Learn more about Youssef→

[1] See, e.g., Martin Gilens, Why Americans Hate Welfare: Race, Media, and the Politics of Antipoverty Policy (Chicago: University of Chicago Press, 1999); Thomas Piketty, “Social Mobility and Redistributive Politics,” The Quarterly Journal of Economics 110, no. 3 (August 1, 1995): 551–84; Eliot R. Smith and James R. Kluegel, Beliefs about Inequality: Americans’ Views of What Is and What Ought to Be (New York: Aldine Transaction, 1986).