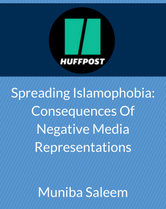 Does the media inform us about policies, or does it influence the policies we accept? Recent research suggests we are far more influenced by media than we think. In the case of Americans’ attitudes towards Muslims, research reveals that exposure to negative representations of Muslims in the media increase not only negative attitudes towards Muslims, but also support for policies that harm Muslims internationally and domestically.

Though the policies referenced above were hypothetical, they are similar to those being considered currently by the American government. On March 6, President Trump issued a new executive order banning immigrants seeking new visas from six predominantly Muslim countries. Although similar orders have been met by nationwide protests and opposition, public opinion polls revealed that the public is divided regarding this policy, with 47% in favor.

The majority of Americans are instead exposed to Muslims through the media, which tends to represent Muslims as terrorists, violent, and “the Other.” Negative representations of Muslims have been observed across American media outlets, including cable news, newspapers, television and movies and video games.

These negative media representations increase perceptions of Muslims as aggressive, negative emotions towards Muslims, and support for policies harming Muslims. For example, one study found that reliance on media for information about Muslims was associated with Americans’ support for public policies targeting Muslims three months later. These policies included military action against Muslim countries, separate and more thorough airport security lines for Muslim travelers, and revoking the right to vote for American Muslims. Reliance on personal contact for information about Muslims, however, produced the opposite effects. Importantly, these effects remained even after controlling for individual differences in political orientation.

Beyond affecting the majority group, negative media images influence how minorities think about themselves and their acceptance within the mainstream society. American Muslims are aware of and distressed by the negative representation of their religious group within mainstream American media.

Many report being questioned about their patriotism due to an assumed incompatibility between American and Muslim identities. Despite speculations of these identities being incompatible, a recent report by the Institute for Social Policy and Understanding reveals there is a positive association between Muslim and American identities. In other words, American Muslims who strongly identify with their religion also identify strongly as American.

However, under certain social contexts, where their religious identity is threatened, American Muslims are likely to distance themselves from American culture. For example, an experimental study revealed that American Muslims who were exposed to negative media representation of Muslims were: A) Less likely to desire acceptance by other Americans, and B) More likely to avoid interactions with non-Muslim Americans compared to those who were exposed to neutral media images of their religious group. Negative media portrayals alienate American Muslims from their own country.

Similar effects have been found in regards to meta-perceptions (perceptions of how others think about your group). Specifically, meta-perceptions of Muslims as dehumanized (less than human) reduce American Muslims’ willingness to integrate within American culture or to help with counter-terrorism efforts. These studies emphasize that media representations and the majority’s perceptions can ultimately affect the extent to which minority members feel accepted and included within the national identity and culture.

Despite their frustration with media’s representation, American Muslims have optimistic views of a more tolerant future for the nation. Many American Muslims felt solidarity in the face of recent events including protests opposing the executive order and public outpouring of support over threats and defacement aimed at mosques.

Muniba Saleem, Ph.D., is an Assistant Professor in the Department of Communication Studies and a Faculty Associate at the University of Michigan’s Institute for Social Research. She is a Scholar at the Institute for Social Policy and Understanding (ISPU), where her areas of expertise include Media Stereotypes, Social Psychology, Quantitative Methods, and American Muslims.

This article originally appeared in the Huffington Post on April 24, 2017.