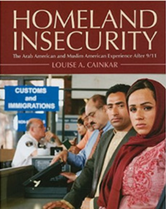 Homeland Insecurity: The Arab American and Muslim American Experience After 9/11

In the aftermath of 9/11, many Arab and Muslim Americans came under intense scrutiny by federal and local authorities, as well as their own neighbors, on the chance that they might know, support, or actually be terrorists. As Louise Cainkar observes, even U.S.-born Arabs and Muslims were portrayed as outsiders, an image that was amplified in the months after the attacks. She argues that 9/11 did not create anti-Arab and anti-Muslim suspicion; rather, their socially constructed images and social and political exclusion long before these attacks created an environment in which misunderstanding and hostility could thrive and the government could defend its use of profiling.