Malleable Stereotypes: How Media Is Improving the Image of American Muslims 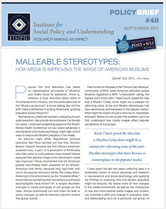 Malleable Stereotypes: How Media Is Improving the Image of American Muslims

Popular film and television has relied on stereotypical portrayals of Muslims and Arabs since its existence. There is, however, a quiet revolution afoot inside of the entertainment industry, and the predictable box of the “Muslim-as-terrorist” is slowly fading. But will this shift make a difference in ending Americans’ growing prejudice toward Muslims?

Neuroscience, a eld that has been undergoing its own quiet revolution, may provide some answers. For the last two years, I have been presenting papers at the Muslim Mental Health Conference1 on how recent advances in neuroscience and social psychology might help us nd ways to reduce anti-Muslim prejudice in the media.

On election night 2008, Republican political operative Karl Rove pointed out that then Senator Barack Obama became the first African-American president due, in part, to a generation of Americans who had come to hold positive views toward blacks because their general image in the mainstream media had improved.2 Rove commented that the American people had already been prepared for an African-American first family because they had lived with one in the popular television series The Cosby Show. Referring to this phenomenon as the “Huxtable effect,” he pointed out something that neuroscience and social psychologists have known for a couple decades: changes in media portrayals of out groups (in this case, African Americans) can and often do lead to policy changes, as well as reduced prejudice toward that group overall.

Fast-forward to the peak of the “Ground Zero Mosque” controversy of 2010, when American attitudes toward Muslims registered a 63% “unfavorable” rating, the highest point since 2001. Katie Couric posed the idea that a Muslim Cosby show might be a catalyst for reforming some of the anti-Muslim stereotypes that have become so commonplace in the popular media.4 What might the impact of such a show be on mainstream attitudes? Before we can answer this question, we must first understand how media images affect popular perceptions of out groups.

I have spent the last two years collecting data in a systematic review of recent advances and research in neuroscience and social psychology and applying my findings to analyzing how anti-Muslim prejudice might be reduced. My review looks at how changes in the media environment, as well as the introduction of new and more positive media images and content, can promote a shift and change in prejudice, bias, and stereotyping vis-à-vis a particular out group. At the Muslim Mental Health Conference in 2010 and 2011, I presented my conclusions to a room full of psychologists, neuroscientists, social workers, and activists. Subsequent conversations with them indicated that my analysis presents several important insights that can assist policymakers, creative professionals in Hollywood, and everyday citizens to more effectively change the ways in which Americans engage with Muslims, both domestically and internationally.

This policy brief examines recent contributions from social psychologists and neuropsychologists who are devising and applying stereotype and prejudice reduction techniques to the present media environment. After presenting the background to the general climate of negative media images of Muslims, I will offer some recent examples of television shows that have introduced nuanced and multi-dimensional Muslim characters and shed some light on the phenomenon of automatic prejudice and the “affective turn” in neuroscience more generally by applying key lessons from important case studies in the eld.

In conclusion, this brief will examine how an accurate portrayal of Muslims as emotionally complex, nuanced, and “human” actors can itself serve as a catalyst not only for reducing stereotypes, but also for improving American citizen diplomacy with Muslims both here and abroad. Such a positive change promotes a greater sense of identity development among American Muslims and, moreover, will improve our democratic processes by giving the public access to portrayals that further develop positive and inclusive Muslim-West relations.