Islamic Law Reform: It’s Easier and Harder Than You Might Think 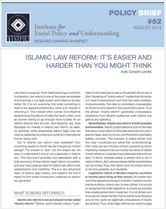 Islamic Law Reform: It’s Easier and Harder Than You Might Think

Against the backdrop of mass protests and violence, and the release of Hosni Mubarak from jail, Egypt’s interim president Adly Mansour received draft constitutional amendments on August 21, 2013. In early July 2013, he had ordered the Legal Experts Committee to discuss controversial articles in the suspended 2012 constitution, including three related to Sharia, and to propose amendments. Given the opportunity to offer suggestions, several organizations are proposing sharia reform, especially in areas of women’s rights, children’s rights, and criminal law.  For example, National Council for Women and the Women’s Parliament group proposed to reform sharia and guarantee women’s rights, while the Egyptian Coalition for Children’s Rights called for children’s rights, maternal protection, and criminal prosecution of female circumcision. But what does it mean to reform sharia?  Are the rules associated with sharia static and unchanging? If not, what does it take to reform them?  In her most recent policy brief, Dr. Asifa Quraishi-Landes explains how and when Islamic legal reform is possible, and what is at stake in such an undertaking.

Law reform is popular. From healthcare to gun control to immigration, law reform is one of the ways we address shortcomings in our legal system and make our society better. So it is not surprising that when something in Islamic law appears problematic, there is an interest in reforming it. This interest often comes from Muslims experiencing the effects of rules that seem unfair, such as women having to go through more hurdles for an Islamic divorce than do men. Non-Muslims, too, have displayed an interest in Islamic law reform, as seen, for example, when established Islamic legal rules are cited as obstacles to consensus-building in international human rights work. But is Islamic law reform even possible? Can something based on divine law be changed by human beings? The answer is “yes,” but the details are not easy to understand if one is not a specialist in Islamic law. This document provides non-specialists with a brief summary of how Islamic legal reform is possible, and why many popular calls for Islamic law reform lack sophistication and credibility. This is a very advanced topic of Islamic legal theory, and readers will find it helpful to first review introductory materials on Islamic law generally.