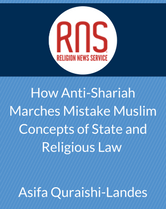 On Saturday (June 10), Marches Against Sharia are planned in more than two dozen U.S. cities. News like this might generate two conflicting instincts.

On the one hand, the claim that Shariah is taking over American law seems far-fetched — almost paranoid — and maybe linked to Islamophobia. (Indeed, in this case, the group organizing the marches, ACT for America, is described by the Southern Poverty Law Center as “far and away the largest grassroots anti-Muslim group in America.”)

On the other hand, you’re probably not a fan of religious law, so if that’s what Shariah is, you don’t want to find yourself defending it – especially if it has anything to do with those ISIS videos.

Both instincts are right. Shariah is not taking over American law, and the campaigns (and marches) against Shariah are unnecessary, serving only to increase fear and hatred toward American Muslims.

But what about religion-based law? Turns out, American Muslims share those concerns — even those who follow Shariah.

Shariah is not “law” in our common use of the term. In the West, law is thought of as something that the state does. But the rules of Shariah don’t come from a state. This is why the phrase “Shariah law” is really confusing.

Shariah (literally, “way”) refers to the way God advises Muslims to live, documented in the Quran and the Prophet Muhammad’s practices.

Because these sources don’t directly answer every life question, Muslim scholars extrapolated rules from those sources with legal analysis called ijtihad. But – and this is crucial – they did this knowing they were human, and fallible.

They called their rules “fiqh,” meaning “understanding,” showing that they knew they could not speak for God. As more scholars engaged in ijtihad, more schools of fiqh grew.

Think of it like this: For Muslims, Shariah is God’s recipe for living a good life. But you can’t taste the recipe. You can only imagine a chef’s understanding of a recipe. Chefs use different techniques and different local ingredients, so the taste will change. Similarly, there is one Shariah, but multiple fiqh versions of Shariah from which to choose to live a Muslim life.

To make things even more complicated for American observers, fiqh doesn’t neatly fit into Western categories of law and morality. Fiqh includes topics that Americans would call legal (grounds for divorce, charitable trust requirements), but also ethics and morality (the duty to rescue those in need), manners (hygiene, controlling anger) and ritual worship (fasting and prayer).

So, when a Muslim says she follows Shariah, that just means she refers to these rules as she lives her life. Does that mean she wants them to become the law of the land for everyone? No. She would be violating Shariah if she did. To understand that apparent paradox, consider how the “law of the land” worked in Muslim societies.

Before colonialism, Muslim legal systems were made up of two types of law: scholar-made fiqh and “siyasa,” laws made by rulers. Siyasa is very different from fiqh. It is not meant to guide individual Muslim lives but rather to serve the public good. Rulers made siyasa laws on things such as marketplace fairness, public safety and fair labor practices – i.e., laws that are necessary for society but not derived from scripture.

The separation of fiqh and siyasa protected Muslim societies from becoming “one law for all” theocracies. Rather than enforcing one version of fiqh on everyone, Muslim rulers appointed different judges from different fiqh schools. This created a “to each their own” environment for fiqh choice as well as the religious laws of Christians, Jews and others.

But don’t countries like Iran and Pakistan, as well as the Islamic State group, impose “one Shariah for all”? Yes.

But not because of Shariah. Thanks to European colonialism, these countries are all nation-states, with centralized state law. Even Islamist parties don’t remember the separation of fiqh and siyasa. Unfortunately, they instead pursue “Islamization” through state enactment of “Shariah.”

So despite the fact that Islam does not have a leader or institution to dictate Islamic orthodoxy, Muslim nation-states have come to define Shariah for their populations – a power wisely denied to Muslim rulers for centuries.

But wait. Those same polls also report that most of the world’s Muslims don’t want religious leaders influencing politics. Is that a contradiction? Not if you understand the difference between fiqh and siyasa.

In other words, deep down, Muslims know they want Shariah in their lives, but they also know that there is an important separation between state (siyasa) authority and religious (fiqh) authority. This idea has deep roots in Muslim consciousness.

In other words, Shariah is not “religious law” as it was known in Europe. So instincts against religious law can comfortably coexist with supporting Muslims’ personal desire to follow Shariah.

Asifa Quraishi-Landes is professor of law at the University of Wisconsin Law School and a fellow at the Institute for Social Policy and Understanding in Washington.

This article originally appeared on the Religion News Service on June 8, 2017.