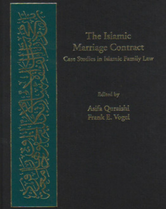 It is often said that marriage in Islamic law is a civil contract, not a sacrament. If this is so, this means that the marriage contract is largely governed by the same rules as other contracts, such as sale or hire. But at the same time marriage is a profound concern of the Islamic scriptures of Qur’an and Sunna, and thus at the very core of the law and morality of Islam and of the individual, familial, and social life of Muslims. This volume collects papers from many disciplines examining the Muslim marriage contract. Articles cover doctrines as to marriage contracts (e.g., may a wife stipulate monogamy?); historical instances (e.g., legal advice from thirteenth-century Spain); comparisons with Jewish and canon law; contemporary legal and social practice; and projects of activists for women worldwide.

Demonstrating a new and powerful focus for comparative and historical inquiries into Islamic law and social practices, this book marks a fresh point of departure for the study of Muslim women.