Caring for Our Neighbors: How Muslim Community-Based Health Organizations Are Bridging the Healthcare Gap in America 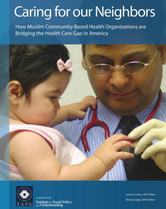 Caring for Our Neighbors: How Muslim Community-Based Health Organizations Are Bridging the Healthcare Gap in America

Muslim community-based health organizations have a history that spans at least two decades in the United States. This study is the first to closely examine how Muslim community-based health organizations (MCBHOs) have developed and are providing free or low-cost primary care services to low-income communities in four cities with large and diverse American-Muslim populations: Chicago, Detroit, Los Angeles, and Houston.

This analysis of 10 prominent MCBHOs in these cities opens a window into the state of American-Muslim public health service. With these health organizations, American Muslims are following in the tradition of other religious minorities, including Catholics and Jews, in initiating a new wave of institution building that had in decades past concentrated on mosques and schools. The rise of MCBHOs in recent years can be seen as an indication of the American- Muslim community’s growing civic and public service role in the cultural mainstream and the emergence of a new American-born generation of Muslims dedicated to serving the only country they have ever known.

The report outlines how Muslim community-based health organizations (MCBHOs) are providing a critical safety net in health care access for the most underserved communities in America. The first-of-its-kind study, titled “Caring for Our Neighbors,” provides a deeper understanding of the motivations that drive American-Muslim health providers, the demographic makeup of the populations they serve and the clinics’ growing role in American public health and community building.

“The rise of these Muslim health organizations draws an interesting parallel to other religiously affiliated hospitals such as St. Luke’s or Cedars Sinai, which initially were started to help those who couldn’t get care anywhere else” said Lance Laird, ISPU fellow and author of the report.

“That service model remains all the more important today as rising health care costs are leaving a growing number of families uninsured,” said Laird. “What we found is that these clinics are stepping in to meet a critical need in communities across America.”

“This pioneering study begins to paint a cohesive picture of the valuable contributions being made every day by American-Muslim health professionals,” said Dr. Faisal Qazi, board member with the Association of Muslim Health Professionals Foundation. “Whether running community health clinics focusing on the underserved, working in nationally recognized research institutions or serving as general practitioners, American Muslim health professionals are motivated by our faith and a strong desire to give back. For many of us this is truly faith in action.”

Researchers found that while the clinics’ service models vary, their services are universally available to everyone, regardless of their patients’ ethnic or religious background, at a low cost or even free of charge. As a result, the vast majority of their patients come from families living below the federal poverty level and almost always lack health insurance.

According the report’s findings, the clinics operate on lean budgets, relying heavily on donated equipment and volunteer physicians, many of whom are first-generation American Muslims who are driven by a desire to give back to the country that welcomed them as immigrants with open arms. The report also documents the emergence of a new American-born generation of Muslims dedicated to serving the only country they have ever known.

ISPU conducted this study in colloboration with the Association of Muslim Health Professionals (AMHP) Foundation.