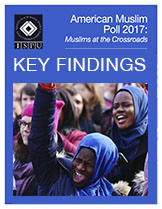 This is a summary of the key findings of ISPU's American Muslim Poll 2017: Muslims at the Crossroads, a poll which offers a timely and groundbreaking look into the American Muslim community.

From early on in a deeply divisive presidential election cycle until today, American Muslims have been at the center of heated social and political debates. One byproduct of this increased salience is an uptick in negatively charged rhetoric and discriminatory acts. Conversely, there has also been an outpouring of support and solidarity (particularly following the election of Donald Trump) aimed not just at Muslims already in the United States, but also toward those who yearn to make America their home. Common across all of these discourses, actions, and reactions, however, is the frequent relegation of Muslims to subjects of consideration. Rarely are Muslims active participants in political dialogue, and even rarer are their attitudes and behaviors systematically examined. The Institute for Social Policy and Understanding (ISPU) American Muslim Poll 2017: Muslims at the Crossroads helps narrow this wide knowledge gap.