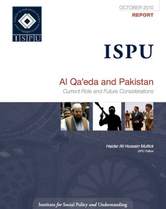 For more than six decades the United States and Pakistan have had a complex relationship, one in which the goal of meeting expectations and sustaining the partnership has always fallen short of the goal of meeting tactical security goals. With the advent of President Barack H. Obama’s administration and his new resource-driven Afghanistan and Pakistan strategies, there was hope of finally building this relationship anew. As military and civilian aid to Islamabad increased, Washington sought to obtain better results from the Pakistani generals and politicians by forging a partnership to defeat Al Qaeda and extreme poverty. Today, many of the gains against Al Qaeda and associates are being reversed as the Pakistani military conducts the largest flood-relief effort in the country’s history. The Kerry-Lugar-Berman bill, originally a civilian aid package has largely become a relief fund and no longer serves as insurance for the civilian government against military intervention. At this monumental time when Washington’s efforts in Afghanistan are under duress and question, nuclear-armed Pakistan’s stability is unquestionably essential for achieving Washington’s mission to disrupt, dismantle, and destroy Al Qaeda. Not only is Al Qaeda taking advantage of the floods, but through a nine-year “train the trainer program” and symbiotic partnerships with equally dangerous organizations like Lashkar-e-Taiba, it has increased its growth, appeal, and reach. This is a clarion call for action to Washington, Islamabad, and their allies. This action must be measured, monitored, and cognizant of Al Qaeda’s metamorphosis since 9/11.