Addressing Mental Health Issues among American Muslims in the Military 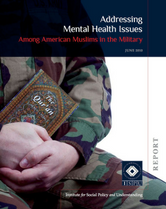 Addressing Mental Health Issues among American Muslims in the Military

The tragic shootings at the Fort Hood Army Base in Texas raised the public’s attention toward Muslims serving in the United States Armed Forces. There was much public conjecture about the motives and mental state of Major Nidal Hasan. While mental health services in the military exist and are utilized by many soldiers, one question that emerged after the shootings was if the military provided adequate support services for American Muslims.

Improved mental health among all soldiers yields numerous benefits, including the potential reduction of self- and other-directed harm. This brief will offer policy recommendations intended to improve access to mental health services for American Muslim military personnel in order to properly care for those who may be at a higher risk for emotional distress.

This brief was developed collaboratively by drawing upon the expertise of providers and researchers of mental health and related services to the American Muslim civilian population, as well as of Islamic chaplains (imams) and providers with specific experience in delivering such services in the military context. It is intended to advise policymakers, mental health and public health administrators, and senior military officers, all of whom are invested in Muslim officers’ mental health, well-being, and high performance in their respective diverse units.