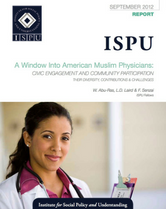 The creation of Medicare and Medicaid in 1965 dramatically changed the availability of healthcare in the United States; however, it left a major gap in health services for Americans living in the inner-city and rural areas. The federal government sought to fill this gap by encouraging the immigration of international medical graduates (IMGs). By 1974, 20% of all American physicians were IMGs, as were 33% of all hospital resident trainees; by 2010, IMGs comprised 20% of the American physician workforce. Many of them were practicing Muslims who also played an important role in building Islamic institutions in their adopted country.

To date, no published studies deal specially with American Muslim Physicians (AMPs). We have endeavored to study this sector based on the assumption that its members consist of influential people who are contributing to mainstream society and (in many cases) to their countries of origin.

There is a certain social responsibility, particularly on public health issues, that Americans generally assign to physicians. Those who are knowledgeable about their communities, as well as about their patients’ sociocultural needs and available health resources, often provide better patient care. They may facilitate the procurement of appropriate health care for their patients, respond to the need for a more user-friendly health care system, or speak to the public about health issues and inquiring about patients’ social support systems. Some scholars suggest that providing formal instruction on community involvement, both within and outside the classroom, could lead to higher community responsiveness among physicians and may help fill physician shortages in rural and other underserved areas. A qualitative study of “community-responsive” advocate physicians indicates that they have knowledge of their own privilege and power, an understanding of “difference,” exposure to marginalized groups, and the “motivation to do the right thing, give back, make a difference, and be intellectually challenged.”

In addition to their medical role, the AMPs’ identity is shaped by their religion and, in many cases, their immigrant background. The role of religion in determining immigrants’ identity has received increasing attention. Numerous scholars have attempted to explain the increased role of religious identity and affiliation in the lives of post-1965 immigrants in the religiously pluralistic American society. That said, faith-based discrimination, particularly in the wake of 9/11, has shaken the American Muslim community and brought new challenges.

Our primary objective in this study is to offer a first-of-its-kind portrait of AMPs: demographic characteristics, identity and values, civic and political engagement, and challenges with discrimination. From this research, we hope to start a conversation on how to reduce workplace discrimination, increase political participation, and better leverage this segment of the physician workforce to enhance cultural competency within the American healthcare system.