Will Obama Go for the Game Changer: An Arab-Israeli Peace Settlement? 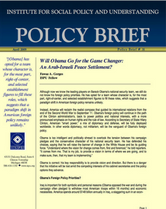 Will Obama Go for the Game Changer: An Arab-Israeli Peace Settlement?

Although now we know the leading players on Barack Obama’s national security team, we still do not know his foreign policy priorities. He has opted for a team whose character is, for the most part, right-of-center, and selected establishment figures to fill these roles, which suggests that a paradigm shift in American foreign policy remains unlikely.

Instead, America will reclaim the realist compass that guided its international relations from the end of the Second World War to September 11. Obama’s foreign policy will continue in the path of the Clinton administration’s, back to power politics and national interests, with a more pronounced emphasis on human rights and the rule of law. According to Secretary of State Hilary Clinton, American “smart power,” a mix of diplomacy and defense, will be fully deployed worldwide. In other words diplomacy, not militarism, will be the vanguard of Obama’s foreign policy.

Obama is too intelligent and politically shrewd to overlook the tension between his campaign pledges and the conservative character of his national security team. He has defended his choices, saying that he will raise the banner of change in the White House and be its guiding force. “Understand where the vision for change comes from, first and foremost,” he told reporters. “It comes from me. That is my job, to provide a vision in terms of where we are going, and to make sure, then, that my team is implementing.”

Obama is correct: his key responsibility is to provide vision and direction. But there is a danger that his initiative will be lost amid the competing interests of this cabinet secretaries and the policy options they advance.