Who Speaks For Islam? 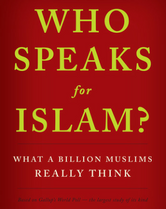 Who Speaks For Islam?: What a Billion Muslims Really Think

In the wake of the terrorist attacks on 9/11, U.S. public officials seemed to have no idea whether or not many Muslims supported the bombings. This troubled Gallup Chairman and CEO Jim Clifton, who felt that “no one in Washington had any idea what 1.3 billion Muslims were thinking, and yet we were working on intricate strategies that were going to change the world for all time.” Clifton commissioned his company to undertake the enormous job. The result is Who Speaks for Islam? What a Billion Muslims Really Think, based on six years of research and more than 50,000 interviews representing 1.3 billion Muslims who reside in more than 35 nations that are predominantly Muslim or have sizable Muslim populations. Representing more than 90% of the world’s Muslim community, it makes this poll the largest, most comprehensive study of its kind.