What Muslims Really Think | Word on the Street: What Osama bin Laden and George W. Bush Get Wrong about Muslims 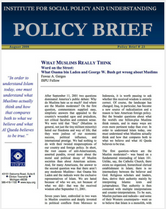 What Muslims Really Think | Word on the Street: What Osama bin Laden and George W. Bush Get Wrong about Muslims

After September 11, 2001 two questions dominated America’s public debate: Why do Muslims hate us so much? And where are the Muslim moderates? On the first question, commentators supplied easy, simplistic answers that appealed to the country’s wounded egos and prejudices, not critical faculties and common sense. We were told that “they” (Muslims in general, not just the tiny militant minority) hated our freedoms and way of life; that they were jealous of our economic success, political influence, and international prestige. We had nothing to do with their twisted misperceptions of our country and foreign policy. In short, the root causes of anti-Americanism, asserted pundits, reveal more about the moral and political decay of Muslim societies than about American actions. And, for many Americans, the answer to the second question was that there aren’t any moderate Muslims– that Osama bin Laden and the radicals were the exclusive representatives of Islam. We are hated because of who we are, not because of what we did– that was the received wisdom after September 11, 2001.

Seven years later, embroiled in two wars in Muslim countries and deeply invested in political conflicts from Morocco to Indonesia, it is worth pausing to ask whether this received wisdom is entirely correct. Of course, the landscape has changed; Iraq, in particular, has become a new source of radicalization and a reason to hate American foreign policy. But the broader questions about what the world’s one billion-plus Muslims think remain, and in many ways are even more pertinent today than ever. In order to understand Islam today, one must understand what Muslims actually think and how that compares both to what we believe and what Al Qaeda believes to be true.