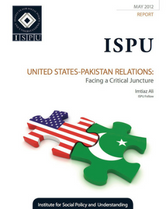 Few would disagree that 2011 was a difficult year for the United States and Pakistan. The shaky relationship deteriorated rapidly over the past twelve months as a result of a series of incidents shortly after the American raid on the Pakistani compound that killed Osama bin Laden on May 2 of last year. It has become a cliché to compare the rocky relationship to a bad marriage, one in which divorce is impossible yet both parties are forced to trudge along unhappily. Never smooth even during the best of times, the past year has brought the relationship to an all-time low. In a November 2011 CBS poll, a majority of Americans said that Pakistan is either unfriendly (39%) or an enemy (24%). Only 2% called it an ally. For their part, Pakistanis don’t see the relationship as any healthier. A June 2011 Pew Research poll showed that most Pakistanis see the United States as an enemy and a potential threat to their country’s security. This paper will address the tumultuous relationship between these two countries including recent turmoil, regional dynamics, often opposed agendas of each country, and options for rebuilding the relationship.

On the one hand, since joining hands in late 2001, Washington has been praising Islamabad for its commitment and sacrifice of more than 3,500 military personnel and as many as 35,000 Pakistani civilians in the “war on terror.” Last year, soon after the killing of Osama bin Laden inside Pakistan, President Barack Obama said, “We have been able to kill more terrorists on Pakistani soil than just about anyplace else. We could not have done that without Pakistani cooperation.” On the other hand, American officials have suspected and often accused the Pakistani military of supporting militant groups, particularly the Afghan Taliban. Although Washington and Islamabad have never been on the same page since 9/11, both sides have always made an effort to maintain their ties.

The two countries have longstanding historic and contemporary reasons for their paradoxical love-hate relationship, but as of now the existing friction has largely been over strategic policy differences as regards Afghanistan. With bin Laden’s killing and al-Qaeda’s leadership greatly diminished by drone strikes in Pakistan’s Federally Administered Tribal Areas (FATA) region, the United States’ highest priority is to develop an exit strategy so that it can withdraw its combat troops from Afghanistan by 2014. To this end, the major challenge is the resilience of the Afghan Taliban, who have been fighting the American-led NATO and Afghan forces for the past decade. Perhaps the most important source of tension is the fact that Pakistan is being accused of supporting Taliban groups.

Evidently, Afghanistan’s end game is the major hurdle because both Islamabad and Washington have been pursuing quite different objectives. But it is not the only factor, for at times both countries pursue quite different strategic objectives that have no major overlapping mutual interests.

There are other factors as well, such as Pakistan’s troubled relationship with India, the distribution of power within Pakistan’s civil-military divide (the military has supremacy over critical issues, including relations with Washington), and the recent emergence of an internal vibrant and mostly anti-American media. In addition, there are several new realities: Washington’s assessment of Islamabad has changed since 9/11, it has down-scaled its objectives in Afghanistan quite radically since the original Operation Enduring Freedom and first Bonn conference, and it has made mistakes in its Pakistani policy.

Pakistan has also changed markedly in socioeconomic ways, not all of which are favorable to Washington. One of the most unfavorable ways has been the rapidly growing and widespread leverage of intolerant religious and sectarian groups such as the recent rise of Difa-e Pakistan Council (DPC) or the Defense Council of Pakistan – a group of more than 40 religious parties and Islamists—whose main focus is to prevent the Pakistani state from improving relations with the United States and India. Perhaps Washington has lost hope of a moderate Pakistan as American policy makers scratch their heads at how “an ally and recipient of so much U.S aid- about $20 billion since 9/11, when military and civilian totals are calculated—can be so ungrateful and so uncooperative in what should be a common cause of eradicating terrorism.” Nevertheless, the relationship remains extremely vital for both sides, though perhaps more so for the United States because of its involvement in neighboring Afghanistan.