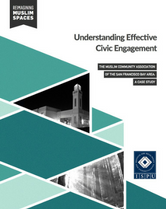 This second report in ISPU’s “Reimagining Muslim Spaces” series presents a case study of the Muslim Community Association (MCA) located in Santa Clara, California, one of the largest mosques in the United States. Established in 1981, MCA has consistently led efforts to promote civic engagement in the American Muslim community. MCA, on its own or in partnership with organizations such as the Council on American-Islamic Relations (CAIR), regularly hosts events and activities focused on involving Muslims in the civic life of America, including sponsoring candidate forums and educational programs to inform the Muslim community of their rights and responsibilities as active American citizens.

The goal of the 'Reimagining Muslim Spaces' project is to produce research-driven recommendations to enable the development of a mosque that is:

To illustrate how mosques can serve as hubs for hope, ISPU identified real life examples of American Muslim Institutions doing just that. Rather than simply providing theoretical advice, our researchers interviewed the very people who built these programs and institutions to identify the secret to their success and the wisdom gained from their struggles. We hope these case studies will inspire and instruct others working to develop institutions that serve and uplift.