Under the Influence: Alcohol Use among Muslim College Students 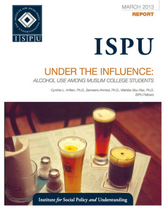 Under the Influence: Alcohol Use among Muslim College Students

Alcohol abuse is a costly social and public health problem. To reduce its consequences, the United States has invested substantial resources to document use and abuse, monitor changes within demographic groups, and intervene. However, the data collected in all of these areas has little to say about drinking among Muslims because many surveys do not ask for one’s religious affiliation and due to the challenges related to sampling this particular population.

One Muslim subgroup that may be at high risk is college students, for drinking is a very common activity among students. Negotiating these college/university norms may be especially challenging for Muslim students due to Islam’s prohibition of alcohol and the cultural taboo that may exist among even non-observant Muslims. Knowing how they negotiate these norms will inform prevention, early intervention, and treatment efforts for the growing number of Muslims in the United States.

In light of the need for more data, ISPU funded this pilot study to initiate the process of documenting the prevalence of alcohol use among this specific population and to explore potential areas of intervention. In particular, this pilot study examines the relationship of alcohol use and various factors: family, religiosity, personal beliefs, and social influences. Our research combined an innovative sampling technique – respondent-driven sampling – with a web-based survey to gather data on this difficult-to-reach group.

Our pilot study gathered and analyzed data on 156 self-identified Muslim undergraduate students at Wayne State University (WSU), an urban university located in Detroit, MI. This university was chosen because (1) the Detroit metropolitan area hosts a large Muslim population, (2) WSU is located in a state where a large proportion of adults use alcohol, and (3) the campus is located near alcohol outlets, which makes alcohol beverages readily accessible to WSU students.