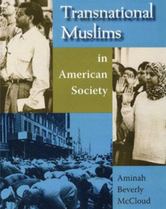 This in-depth yet accessible guide to Islamic immigrants from the Middle East, South Asia, Southeast Asia, and Africa challenges the widely held perception that Islam is monolithic and exclusively Arab in identity and expression. Offering a topical discussion of Islamic issues, the author argues that there is no one immigrant Islam community but a multifaceted and multi-cultural Islamic world. She offers an insider’s look at what ideals and practices Muslims bring to this nation, how they see themselves as Americans, and how they get along with each other and with indigenous American Muslims. While much of the author’s research and writing precedes 9/11, she interweaves the events of that day and their subsequent impact on the lives and fortunes of immigrant American Muslims. Intimately exploring some of the immigrant communities through their stories and the history of American-Islamic relations, McCloud addresses women’s equality, discrimination, rivalries among divisions within the faith, and immigration problems. Her findings are telling regarding a community in transition, chaos, and fear. Each community has a culturally bound understanding and practice of Islam mostly shaped by a particular colonial experience. Muslim world philosophies and traditional authority are under siege, and there is a great deal of tension between communities and with the indigenous community over authority and leadership.