To Have and To Hold: Interfaith Marriage Just as Common among Muslim Americans as Christians 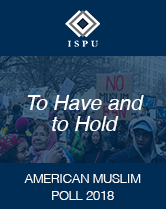 To Have and To Hold: Interfaith Marriage Just as Common among Muslim Americans as Christians

Across all faith groups, interfaith marriage is becoming increasingly common in America. This pattern is partly a function of the broad acceptance of interracial marriage beginning in the Civil Rights era and a decreasing adherence to organized religions in the last several decades (some estimates reporting the percentage of religiously unaffiliated Americans has more than quadrupled since 1990). Recently married Americans who consider themselves Jews are four times more likely to marry someone outside their faith as Jewish Americans who married before 1970.

Are Muslims following the same trajectory? Naomi Schaefer Riley, who wrote a groundbreaking book on the topic, opens her 2013 Washington Post opinion piece with an assertive answer: “When it comes to intermarriage, Muslims are becoming the new Jews.”

We examine this claim using data from the 2018 American Muslim Poll. Figure 1 compares the percentage of interfaith marriage among discrete religious groups and the non-affiliated. American Muslims are statistically just as likely as Catholics, Protestants, and white Evangelicals to marry outside their faith, yet fall slightly below the rate among Jews.

However, when including those who report they are cohabitating with a person of another faith alongside those who intermarried, the rate of Muslims in interfaith relationships is statistically on par with American Jews (Figure 2). While the percentage of Muslims in this broader category still trails that of Jews, there is demographic evidence to suggest that the two rates will continue to converge over time.

Who is more likely to religiously intermarry among American Muslims? Figure 3 compares the percentages of interfaith relationships across four key demographics. Intuitively, one would think that those born in the U.S. would be more likely than their foreign-born counterparts to intermarry but, statistically, these two groups are indistinguishable.

When you take cohabitation into account, however, that is when these two groups meaningfully diverge with native-born Muslims being nearly three times as likely to be in an interfaith relationship as those born outside the U.S.

A similar dynamic plays out in terms of race/ethnicity. Whereas non-Black and Black respondents are statistically just as likely to religiously intermarry, the rate of interfaith marriage and cohabitation sets Black respondents, who are more likely to be in interfaith relationships, apart. There is no clear explanation for this divergence, but it is likely driven in part by the most surprising (and surprisingly strong) correlate in our analysis.

Among the factors examined, college education offered the clearest dividing line. Both in terms of marriage-only and marriage or cohabitation, those who hold a college degree were significantly less likely than their less-educated counterparts to be involved in an interfaith relationship. The basis for this association is not evident. It could be that Muslims who enter college are already predisposed to marry within their faith, or perhaps the college environment offers particular resources that encourage intra-religious relationships (such as organizations, like the Muslim Students Association that reinforce one’s Muslim identity or, alternatively, offer opportunities to meet fellow Muslims).