Through the Smoke: Tobacco Use in the Middle East 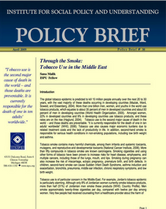 Through the Smoke: Tobacco Use in the Middle East

The global tobacco epidemic is predicted to kill 10 million people annually over the next 20 to 30 years, with the vast majority of these deaths occurring in developing countries. More than one billion men, women, and youths in the world use tobacco products, which equates to about 35 percent of men in developed countries and about 50 percent of men in developing countries. Amongst women, 22% in developed countries and 9% in developing countries use tobacco products, and these rates are on the rise. Tobacco use is the second major cause of death in the world—and those deaths are preventable. “It is currently responsible for the death of one in ten adults’ worldwide” (WHO, 2006). Tobacco use also causes major economic burdens due to related treatment costs and the lack of productivity in life. In addition, second-hand smoke is responsible for serious health conditions in non-smoking populations, including low birth weight and asthma.

Tobacco use is of particular concern in the Middle East. For example, Jordan’s tobacco epidemic is particularly alarming. Although only 8% of Jordanian women currently smoke tobacco products, more than half (51%) of Jordanian men smoke these products. Men smoke approximately twenty-three cigarettes per day, compared with twelve per day among women. Very few people had received counseling from a healthcare provider about he harm of smoking. Another serious indicator of this behavior risk factor’s severity is the rate of smoking (about 20%) among school children between 13-15 years of age. One-quarter of all men in this age category smoke; 15% of their female counterparts smoke.