Through the Health Lens 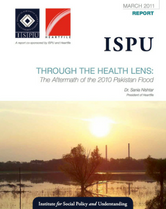 Through the Health Lens: The Aftermath of the 2010 Pakistan Flood

The devastation evident in the aftermath of the 2010 flood in Pakistan, the worst humanitarian disaster on the face of this planet in recent history, drives home the importance of several health norms: the definition of health with reference to the inclusion of “well-being” alongside “absence of disease and infirmity,” the growing importance of the interplay of the social determinants of health enshrined in a landmark report, the recent emphasis on the “health in all Policies” statement, the notion that a health system is broader than a healthcare system, and the importance of the holistic vision for human security.

With 20 million people affected and a majority of them homeless without access to adequate clean water, sanitation, food, and healthcare, the importance of factors outside of the health sector and the inter-sectoral scope of health have been brutally brought to public notice. The floods are also a reality check, reminding us that climate change can alter the equation of human existence with devastating impact for vulnerable populations and serious implications for health and well-being. Over 1.6 million houses have been damaged, many razed to the ground, and 3.2 million hectares of standing crops inundated. Twenty percent of the country’s land mass— more than the entire landmass of Italy — has been affected. In some of these areas access has become a major issue, with roads and bridges washed away and colossal damage done to communication and irrigation infrastructure in other badly hit areas. Millions of poor people in the riverside communities of the Indus have been pushed further into poverty.

Unfortunately, the flood hit while the country is grappling with many issues on several fronts. The huge need to allocate resources for relief, rehabilitation, and rebuilding has arisen at a time when grinding economic challenges are competing for resource allocation priorities vis-à-vis internal security, the ongoing war, the energy crisis, etc. as a result, there is a widespread reliance on humanitarian and development assistance for the relief and rebuilding phases. Such expectations might not be fully realized, however, as donors themselves are recovering from the impact of a global recession. Donor fatigue among bilateral and multilateral donors has already set in, as well as a lack of trust regarding the weaknesses in governance and transparency. In fact, many donors recently stated that Pakistan should step up its indigenous capacity to mobilize resources rather than relying on external aid.

A further compounding factor is the ongoing reshaping of the state’s institutional arrangements. The eighteenth amendment to the Constitution of Pakistan has altered the equation of responsibility in the federating system by envisaging the empowerment of provinces as subnational units with greater autonomy. As this is being implemented now, many processes are in flux. The local system of government is being reshaped, and the ensuing lack of clarity in responsibilities and prerogatives has been one of the most critical impediments in the relief phase. This constraint has undermined the government’s ability to implement plans effectively. Additionally, non-state actors are not sure who they are to engage with at the local government level in many districts. The flood and its handling by the government and non-state actors have made visible a host of critical institutional challenges within Pakistan’s governance system. It is not possible to analyze each constraint here. The objective of the paper is to provide a snapshot view of the flood’s impact on Pakistan’s health system and the health of its population, as well as the limitations that systemic constraints have posed in this regard. The analysis has largely been based on a qualitative assessment, inclusive of reviews of published and grey literature. Information has been supplemented with informants’ views where necessary.