The Way Forward on Combating Al-Qa’ida-Inspired Violent Extremism in the United States: Suggestions for the Next Administration 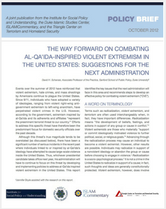 The Way Forward on Combating Al-Qa’ida-Inspired Violent Extremism in the United States: Suggestions for the Next Administration

Events over the summer of 2012 have reinforced that violent extremism, hate crimes, and mass shootings by Americans continue to plague the United States. Since 9/11, individuals who have adopted a variety of ideologies, ranging from violent right-wing anti-government extremism to left-wing anarchism, have perpetrated violent crimes in the U.S. However, according to the government, extremism inspired by al-Qa’ida and its adherents and affiliates “represent the preeminent terrorist threat to our country.” Efforts to address this specific threat have therefore been the predominant focus for domestic security officials over the past decade.

Although this threat’s true magnitude tends to be overstated (as discussed below), there have been a significant number of serious incidents in the recent past where individuals linked to or inspired by al-Qa’ida’s ideology have attempted to cause large-scale violence inside the United States. Thus, whichever presidential candidate takes office next year, his administration will have to continue to focus on this threat by developing and implementing policies to address al-Qa’ida inspired violent extremism in the United States. This report identifies the key issues that the next administration will face in this area and recommends steps to develop an effective policy for combating violent extremism (“CVE”).

This policy brief is published by ISPU, DISC, ISLAMiCommentary and the Triangle Center on Terrorism and Homeland Security.