The USA Patriot Act: Impact on the Arab and Muslim American Community 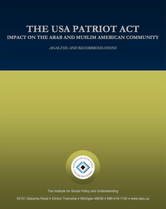 The USA Patriot Act: Impact on the Arab and Muslim American Community

Soon after the September 11, 2001 terrorist attacks, members of Congress quickly passed legislation to grant sweeping new power to both domestic law enforcement and international intelligence agencies The new law, known as the USA Patriot Act was passed within weeks of the attacks, yet received little input from experts outside law enforcement or debate from the general public. This far reaching piece of legislation, which the government says will strengthen security, broadly expands the powers of federal law enforcement agencies to gather intelligence and investigate anyone it suspects of terrorism.

While Congress undoubtedly had the best of intentions in mind, the new law has been a major blow to the constitution and the cherished freedoms guaranteed to all Americans. Civil liberties of ordinary Americans have taken a tremendous beating with this law, and none more so than Muslims, South Asians and Arab Americans. According to a recent report from the Justice Department’s inspector general, which looked into allegations made under the provisions of the Patriot Act, most complaints were from Muslim Americans and Americans of Arab descent. The report has numerous claims from Muslims and Arabs that were beaten or verbally abused while being detained by government officials. In other cases, financial institutions have used extreme interpretations of the Patriot Act to justify blacklisting Muslim account holders simply because their names matched those on a master government list.

In addition, ambiguities in interpreting the law have led to misapplication of the law by government officials as well as abuses by enforcement officers. Incidents include airport profiling, verbal harassment and physical assaults. It has also led to a backlash against Arabs, Muslims and South Asians in which hate crimes are on the rise and neighbors are spying on neighbors simply because their “features” or “traits” look threatening. According to the FBI’s Uniform Crime Reporting Program, 481 hate crimes were documented against Muslim Americans and Arab Americans in 2001. This is a massive increase from the 28 cases reported in 2000. Similar reports more recently have been documented by Human Rights Watch, the Council on American-Islamic Relations, the American Arab Anti-Discrimination Committee and the Lawyers Committee for Human Rights. While the Department of Justice has brought federal criminal charges against a number of individuals involved in hate crimes, it is official government policy targeting these communities which creates a climate of discrimination and enables hate crimes to continue.

The problem with the administration’s rationale is once the government successfully constructs an enemy group, it can justify detentions without charge, physical abuse, and other drastic means of waging war against “the enemy”. Historically there are numerous examples of such shortsighted thinking. The Alien and Sedition Acts of 1798 placed restrictions on which ethnicities or nationalities could apply for citizenship, and authorized the President of the United States to order the deportation of all immigrants judged dangerous to national security. The Chinese Exclusion (Geary) Act of 1882, forbade Chinese laborers from entering the United States. The McCarran-Walter Act of 1952 empowered the Department of Justice to deport immigrants or naturalized citizens engaging in “subversive” activities.4 And finally it was the internment of Japanese Americans during the Second World War that elevated this type of xenophobia into national policy. The internment order was rationalized not only by military necessity – the fear of sabotage and espionage – but also by the military’s claim that the normal criminal investigatory work of the Justice Department had been overly slow and inadequate to guarantee U.S. security.

A close examination of the Act shows many weaknesses which this report hopes to address. The 342 page Act includes more than 150 sections, and amends over 15 federal statutes, including laws governing criminal procedure, surveillance, foreign intelligence, wiretapping, and immigration. Particularly troubling are sections 206, which permits the use of “roving wiretaps” and secret court orders to monitor electronic communications to investigate terrorists; sections 214 and 216, which extend telephone monitoring authority to include routing and addressing information for Internet traffic relevant to any criminal investigation; and, finally, section 215, which grants unprecedented authority to the Federal Bureau of Investigation (FBI) and other law enforcement agencies to obtain search warrants for business, medical, educational, and library records merely by claiming that the desired records may be related to an ongoing terrorism investigation or intelligence activities – a very relaxed legal standard which does not require any actual proof, or even reasonable suspicion of terrorist activity.

While there is clearly a need for the administration to fight terrorism, national security does not require draconian laws that infringe on the rights of American citizens. There is nothing inconsistent in assuring that law enforcement authorities are properly equipped to respond to the threat of terrorism while, at the same time, assuring that Americans of all religions and ethnic groups are treated fairly and decently. The government already has the authority to prosecute anyone whom it has probable cause to believe has committed or is planning to commit a crime. It also has the authority to engage in surveillance of anyone whom it has probable cause to believe is a foreign power or spy – whether or not the person is suspected of any crime. The key is to find a balance between avoiding unnecessary self-exposure to the dangers that exist and avoiding blind policing of specific communities.

Two recent bills that provide this balance are worth noting. Republican Senator Lisa Murkowski’s “Protecting the Rights of Individuals Act” and Democratic Representative Denis Kucinich’s, “Benjamin Franklin True Patriot Act” are two such bills that should be commended. They are a balanced compromise that protects civil liberties while giving the government the authority to fight terrorism. Both bills would make a number of changes to the Patriot Act including requiring a court order for U.S. law enforcement agencies to conduct electronic surveillance. Murkowski’s bill would also require increased judicial reviews before law enforcement agencies monitor some telephone and Internet usage, and it would limit the FBI’s ability to look at sensitive personal information, including medical, library and Internet records, without demonstrating specific suspicion to a judge. The bills would require that law enforcement agencies wanting to place roving wiretaps on telephones must show courts information that a crime has been, or is expected to be, committed, and it limits law enforcement requests of libraries to turn over information on Internet use by their patrons to the investigation standards outlined in the Foreign Intelligence Surveillance Act. That law requires that law enforcement agents have probable cause to believe that surveillance targets are foreign powers or agents of foreign powers. Senator Murkowski’s and Representative Kucinich’s bills are a step in the right direction and should be supported.

It is laudable that in passing the Act, Congress was sufficiently mindful to sow into the Act’s lining a limited “sunset” provision. Certain sections of the Act, primarily those relating to enhanced surveillance, are due to expire on December 31, 2005. It is to their credit that in July 2003, the U.S. House of Representatives passed a funding bill effectively rolling back a provision of the Act which did away with the longstanding “knock and announce” policy for federal police searches of real property. Despite these safeguards by Congress, there continues to exist a de facto unequal protection afforded by the Act, specifically by the enhanced surveillance provisions, financial due diligence provisions and immigration-related provisions of the Act. Constitutional concerns such as these militate toward an accelerated schedule of abandonment of the most pernicious provisions of the Act and enactment of a sunset for all other weak provisions.

In addition, one of the major consequences of rushing the legislation though Congress was the inadequate input received from the general public. An Act as far reaching as this and one that strikes at the core of what it means to be an American should thoroughly be debated and surely get adequate input from experts and the public; none more so than those most directly impacted by the new law. After all, the core of the American experiment is liberty, the freedom secured through constitutional rights of individuals and limitations on government power. Under the constitution, government powers are subject to limits by the courts, the Congress and the people.

The goal of this report is to add a public dimension to this very important debate and especially give voice to those most directly affected by the Act. By analyzing the provisions that negatively impact the rights of Muslim and Arab Americans, this report hopes to highlight some of the weaknesses of the Act in its current form. It should be noted though that these same provisions have slowly crept into other communities and are now having a profound impact on the rights of all American citizens regardless of their race, ethnicity or religion. We hope this report provides both a basic understanding of the Patriot Act as well as contributes to the ongoing debate of balancing the need for security with protecting civil liberties.