The United States and Political Islamism: From Demobilization to Deradicalization? 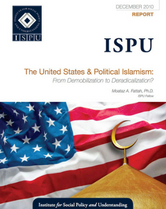 The United States and Political Islamism: From Demobilization to Deradicalization?

Islamists are too important to be left without a well-crafted American strategy. Some are ready to use violence against American targets and interests; others have renounced violence and are ready to compete for office within the legal boundaries of their polities. “Free” parliamentary elections in most Muslim countries have led to a wave of Islamist victories during the past decade. If truly free and fair elections were to be conducted in most of these countries, Islamists would achieve undeniable gains that might give them a majority of parliamentary seats or at least enable them to be a strong opposition with a real voice in shaping the public agenda.

This study seeks to understand how the Obama administration should formulate a multi-faceted and multi-layered policy toward these different Islamist groups and formations. The most illustrative analogy to describe what al-Qa’eda affiliates accomplished on September 11th is that they penetrated this country’s political nervous system. Consequently, the Bush administration behaved like an elephant irritated by ants in its ears and engaged in self-defeating, short-sighted, and ill-de ned policies toward friends and enemies alike. The Obama administration’s greatest challenge is to remove these ants by reconsidering the previous administration’s one-size-fits-all generalizations about the complex and multi-layered phenomenon of political Islam. “Political Islam” denotes a set of political ideologies and movements holding that Islam is not only a religion but also a political system and its teachings should be preeminent in all facets of society including the process of legislation.

Washington developed a strategy to deal with violent Islamists; however, it neglected to develop a cohesive strategy to deal with the nonviolent Islamists who make up the majority of Islamists. The Bush administration’s strategy to undermine terrorism and violence relied on military engagement (assuming that it is a war in which the United States sought to undermine violence by engaging in a preemptive violence) and procedural democratization. Such an approach failed to engage Islamists in a constructive dialogue and therefore was – and remains – ineffective as regards combating extremism or mitigating violence in the long run.