The United States and Political Islam: The Dialectic of Hegemony and Resistance 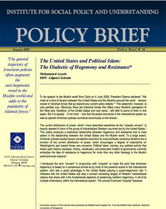 The United States and Political Islam: The Dialectic of Hegemony and Resistance

In his speech to the Muslim world from Cairo on 4 June 2009, President Obama declared: “We meet at a time of tension between the United States and the Muslims around the world – tension rooted in historical forces that go beyond any current policy debate.” This statement, however, is only partially true. Obviously there are historical forces that affect many Muslims’ perception of the West and, therefore, of the United States and vice versa. I will refer to some of them in this paper. But it is equally—if not more—true that the power structures in the international system as well as specific American Policies contribute enormously to the tension.