The U.S. Talks to Egyptians: Who Is Listening? 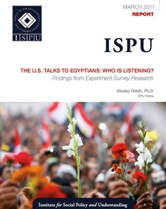 The U.S. Talks to Egyptians: Who Is Listening?

As a concept, American public diplomacy toward Arab and Muslim countries is a concept much used but seldom subjected to any rigorous empirical analysis. Public diplomacy has shifted from the language of prestige and international status to that of a state’s soft power, smart power, and approval rating. This very broad concept also refers to several initiatives, activities, and symbolic gestures. One of its most important components is the messages directed by American public officials to foreign audiences in their own language. This paper use the Arabic-language material located on the websites of the U.S. Department of State (http://www.america.gov/ar/) and of American embassies in Arab states as the stimuli to examine how they impact Egyptian university students’ perceptions of the United States after reading them. These public diplomacy messages include the speeches of and interviews with the American president and top officials stories and reports on American society, and Muslim life in this country.

Despite the growing number of direct and technological messages to Arabs and Muslims, most American experts are not sure how they can do to win the hearts and minds of the targeted audiences. In other words, if this information is not creating a more sympathetic and supportive attitude among the targeted audiences despite all of the resources being poured in, what is to be done? Surveys and public opinion polls have shown that Muslims’ attitudes toward the United States do fluctuate but never explained why they fluctuate.

This study focused on Egyptian university students because Egypt is considered strategically important and because it is one of this effort’s most targeted countries. University students, the most vibrant cohort of any society, also make up two-thirds of Egypt’s population.

Pew surveys show that Egyptians’ favorability rating of the United States ranged from 20 to 30 percent during the past decade (Pew Global Attitudes Project, 23 July 09). A Gallup survey shows even lower numbers (Sitte and Mogahed, 2 June 2009). Obama’s image had a relatively positive effect in general, as will be discussed later. Yet we have been unable to identify those people who have these positive attitudes and why they hold them. In order for the two countries to have healthy relations and a strategic partnership, one needs to go beyond the “what” and “how” questions to the “why” and “what can be done” questions. This project seeks to do that.

The experimental approach employed in this survey moves from the telescopic reading of the United States’ image among Egyptians to a microscopic one that adds more nuance and details to the big picture. Such a reading was especially important when President Obama stated that he wanted to “speak directly” to the Arab street and persuade its members of America’s “straightforward manner”. Then at the margins, both they and their leadership are more inclined and able to work with us” (Friedman 2009).

As for this survey’s relevance to American policy making, one needs to refer to two trends of thought among commentators and policymakers. Some belittle the value of any public diplomacy campaign in these countries: “A Muslim has no nationality except his belief according to the intellectual godfather of the Islamists, [the] Egyptian Sayyid Qutb … [thus,] this is a long twilight war, the struggle against radical Islamism. We can’t wish it away. No strategy of winning ‘hearts and minds,’ no great outreach, will bring this struggle to an end. America can’t conciliate these furies” (Ajami 2010). Others, such as Secretary of Defense Robert Gates argue that “much of our national security strategy depends upon securing the cooperation of other nations, which will depend heavily on the extent to which our efforts abroad are viewed as legitimate by their publics.” The key, he says, is “the steady accumulation of actions and results that build trust and credibility over time” (Gates 2010).

Given this debate (Cull 2009), this study empirically examines both if and how public diplomacy really works through a quasi-experimental survey research when faced with two related questions: (1) How influential is American public diplomacy among its targeted audiences (mainly educated Egyptian youth)? and (2) What are the demographic, cognitive, and attitudinal characteristics of those individuals who are most likely to be influenced by these messages?

A research design based on survey experiments was developed to answer these questions. Data collection was conducted in March 2010 by surveying 772 participants from Cairo University, Alexandria University, Suez Canal University, and Assiut University. After first responding to the survey, they were asked to read Arabic-language excerpts from the U.S. Department of State’s Arabic-language website about American society, policy toward Muslim and Arab countries, and quotes from presidential speeches. They then had to answer the survey questions again, after which any change in their attitudes was analyzed. The resulting percentages were plotted on a ten-point scale to determine the degree of change. When done, forty students volunteered to participate in focus group discussions to discuss how and why they had reacted to the survey questions.