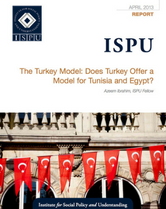 The Turkey Model: Does Turkey Offer a Model for Tunisia and Egypt?

Leaders in Tunisia and Egypt have acknowledged Turkey as a potential model for their emerging democracies due to its ability to balance Islam and democracy. Rashid Ghannouchi, leader of Tunisia’s Ennahda Party, views Turkey’s ruling Justice and Development Party (AKP) as “a model of success for his country to follow,”and Egypt’s Mohammed Morsi recognized the AKP’s inspiration when he visited Turkey in September 2012.

Some maintain that the much-debated “Turkish model” implies a moderate Islamic model and emphasize Turkey’s secular nature, while others remain cautious about the nature of its democracy. Many welcome this model as an alternative to the possibility of intolerant,authoritarian, and anti-Western Islamist states. The AKP government, which affirms Turkey’s Islamic affiliations, has adopted a balanced approach. Prime Minister Erdogan stated:

Turkey in its region and especially in the Middle East will be a guide in overcoming instability, a driving force for economic development, and a reliable partner in ensuring security.… I do not claim, of course, that Turkey’s experience is a model that can be implemented identically in all other Muslim societies. However, the Turkish experience does have a substance which can serve as a source of inspiration for other Muslim societies, other Muslim peoples.

This report assesses the constitutional changes under discussion as Turkey, Egypt, and Tunisia draft new constitutions; compares their judicial systems, civil institutions, civil and minority rights; and analyzes Islam’s role in each country to evaluate its relationship to democracy.

Turkey’s success has been largely due to its healthy economy, which can serve as a key learning model for Tunisia and Egypt. Despite their individual differences, the Turkish model remains an example to observe, learn from, and emulate, especially as Turkey moves forward in its foreign policy to become a leading voice among Muslim nations.