The Politics of Chaos in Muslim Lands: A European Perspective 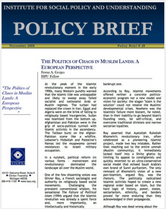 The Politics of Chaos in Muslim Lands: A European Perspective

At the peak of the Islamist revolutionary moment in the early 1990s, many Western pundits warned
that the Islamic tide was unstoppable and likely to sweep away failed socialist and nationalist Arab or Muslim regimes. The turban had replaced the crown in Iran. Egypt and Algeria were on the brink of falling to religiously based insurgencies. Sudan was Islamized from the bottom up. Afghanistan and Pakistan were in the grip of socio-political turmoil with Islamic activists in the ascendancy. The Taliban burst on the Afghan-Pakistan scene like a wildfire. Lebanon’s Hizbollah and Palestine’s Hamas led the muqawama (armed resistance) to Israeli military occupation.

In a nutshell, political reform (in various forms – mainstream and revolutionary) dominated the landscape all over the Muslim world.