The Political Economy of the Rising Islamists 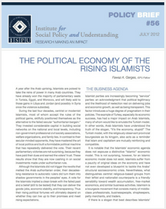 The Political Economy of the Rising Islamists

A year after the Arab uprising, Islamists are poised to take the reins of power in many Arab countries. They have already won the majority of parliamentary seats in Tunisia, Egypt, and Morocco, and will likely add to those gains in Libya and Jordan (and possibly in Syria once the violence subsides).

During the last four decades, centrist or modernist Islamists, most of whom accept the rules of the political game, skillfully positioned themselves as the alternative to the failed secular “authoritarian bargain.” They invested considerable capital in building social networks on the national and local levels, including non-government professional civil society associations, welfare organizations, and family ties. In contrast to their secular-minded opponents, they have mastered the art of local politics and built a formidable political machine that has repeatedly delivered the vote. Their recent parliamentary victories are not surprising, because they have paid their dues and earned the voters’ trust. These results show that they are now cashing in on social investments made under authoritarian rule.

Although the Islamists did not trigger the revolts that melted the Arab authoritarian order, their decades long resistance to autocratic rulers did turn them into shadow governments in the peoples’ eyes. A vote for the Islamists implied a clean break with the failed past and a belief (still to be tested) that they can deliver the goods: jobs, economic stability, and transparency. Thus their rising political fortunes will ultimately depend on whether they can live up to their promises and meet rising expectations.