The “Obama Doctrine” in the Middle East 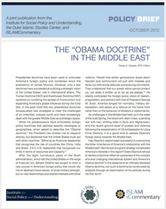 The “Obama Doctrine” in the Middle East

Presidential doctrines have been used to articulate America’s foreign policy and worldview since the presidency of James Monroe. However, only a few doctrines have succeeded at outlining a strategic vision of the United States’ role in international affairs. The Truman Doctrine (1947) and Eisenhower Doctrine (1957) centered on curtailing the spread of Communism and expanding America’s global influence during the Cold War. In the post–Cold War era, presidential doctrines encapsulated new strategies to meet the challenges of an unfamiliar, unipolar world and have increasingly dealt with the greater Middle East as a strategic space.

While his predecessors have articulated foreign policy doctrines that address specific ideologies or geographies, when asked to describe the “Obama doctrine,” the President has chosen not to respond directly, but explained that the United States must act with other countries. “[Mine is] an American leadership that recognizes the rise of countries like China, India and Brazil. It’s a U.S. leadership that recognizes our limits in terms of resources and capacity.”

After the eight tumultuous years of the Bush administration, which left the United States on the verge of financial ruin, Barack Obama has sought to chart a new course in American foreign policy that would rely not on abstract moral values, or brute military strength, but on real relationships and shared interests with other nations: “Recall that earlier generations faced down fascism and communism not just with missiles and tanks, but with sturdy alliances and enduring convictions. They understood that our power alone cannot protect us, nor does it entitle us to do as we please.” He starkly contrasted his foreign policy vision of realism, pragmatism, and restraint with that of President George W. Bush. America longed for normalcy, military deescalation, and above all a refocus on the home front rather than on the behaviour of dictators in distant lands.

As challenges in the Middle East heat up in the wake of the Arab Spring, the recent anti-Islam video, a pending war with Iran, shifting tides in Syria and Afghanistan, and the recent ground-swell of protest and violence following the assassination of US Ambassador to Libya Chris Stevens, it is a good time to assess Obama’s foreign policy towards the Middle East. Has Obama’s realism been successful in overcoming the bitter inheritance of America’s relationship with the Middle East? Has his lack of a grand strategy complicated America’s interests in the region? Does Obama’s refusal to declare a doctrine reflect an awareness of the complex and ever changing international system and America’s relative decline? In the absence of an officially declared Obama doctrine, can such a doctrine be constructed by analysts through an examination of his policies during his first term?

This policy brief is part of the Election Series co-sponsored by ISPU, the Duke Islamic Studies Center, and ISLAMiCommentary.