The Next War? The Danger of the Lebanese-Israeli Border Ignition 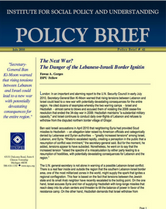 The Next War? The Danger of the Lebanese-Israeli Border Ignition

London: In an important and alarming report to the U.N. Security Council in early July 2010, Secretary-General Ban Ki-Moon warned that rising tensions between Lebanon and Israel could lead to a new war with potentially devastating consequences for the entire region. He cited dozens of examples whereby the two warring camps – Israel and Hezbollah – almost came to blows and accused them of violating the 2006 cease-fire resolution that ended the 34-day war in 2006: Hezbollah maintains “a substantial military capacity,” and Israel continues to conduct daily over-flights of Lebanon and refuses to withdraw from the disputed northern border village of Ghajar.

Ban said Israeli accusations in April 2010 that neighboring Syria had provided Scud missiles to Hezbollah — an allegation later raised by American officials and categorically denied by Lebanese and Syrian authorities — “greatly increased tensions” among Israel, Lebanon, and Syria. “Rhetoric escalated rapidly, creating a perception in the public that a resumption of conflict was imminent,” the secretary-general said. But for the moment, he added, tensions appear to have subsided. Nonetheless, he went on to say that the increased tension “raised the spectre of a miscalculation by either party leading to a resumption of hostilities, with potentially devastating consequences for Lebanon and the region.”

The U.N. general-secretary is not alone in warning of a possible Lebanon-Israel conflict. There is a real fear inside and outside the region that the southern Lebanon-Israel border area, one of the most militarized zones in the world, might supply the spark that ignites a regional conflagration. This fear is based on the fact that tensions between the Jewish state and its small Arab neighbor have recently escalated to the boiling point. On the one hand, Israel accuses Syria and Iran of supplying Hezbollah with long-range missiles that reach deep into its urban centers and threaten to tilt the balance of power in favor of the resistance camp. On the other hand, Hezbollah demands that Israel withdraw from occupied Lebanese land and stop violating Lebanese sovereignty.