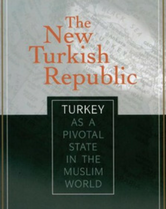 The first in a series of volumes that examine pivotal states in the Muslim world, this timely work explores how, after a long period of isolation, Turkey is becoming a major player in Middle Eastern politics once again. In fact, by acting independently and attempting to reconcile its constitutionally secular form of governance and vibrant traditional culture, it is now for the first time becoming positively viewed by others in the Muslim world as a state worth watching – and maybe even emulating. As a result, Turkey’s dynamic political scene and new search for independence in its foreign policy, however complicating or irritating for the United States today, will nonetheless ultimately serve the best interests of Turkey, the Middle East, and even the West. Drawing heavily on a range of Turkish and Western sources, this multidimensional, lively, and nuanced volume provides an excellent introduction to one of the region’s most fascinating and complex countries and makes a highly valuable contribution to the current debate about Turkey and its place in the world.